* On Wednesday, she shared a concert poster from 19 years ago and a photo from when she performed at school 22 years ago 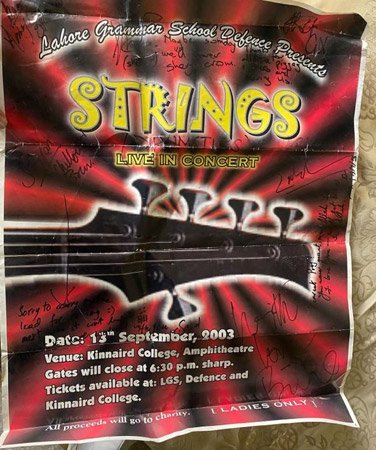 The little support she received from the educational institutes she attended still played a big part in pushing her to pursue her passion. Turning to them, she asked her former schools to formally introduce music into the curriculum.

On Wednesday, she shared a concert poster from 19 years ago and a photo from when she performed at school 22 years ago. “Even that small amount of support I got from the schools I attended in Lahore was enough for me to boldly dream a dream and make it my truth,” she wrote. “Imagine what could be possible if we really actually supported the arts and made space for creative minds to thrive in more than just an extracurricular capacity. Consider this an open letter to LGS, Defence and the Convent of Jesus and Mary, Lahore, asking them to offer music as an O Level and A Level subject.”

Addressing the attachments, she said the poster was from her first live show opening for Strings in 2003. The second was a picture from her first “real” live performance in 2000. The third photo was a little introduction she wrote for the audience. “We are a group of students who have no professional training at music but as the saying goes, ‘Where there’s a will, there is a way.’ And on that note, we end the prize distribution with our presentation,” it read.

Aftab is Pakistan’s rising star – she was recently nominated for a Grammy for the second time in a row for her song ‘Udhero Na’. The first nomination, which she won, was for her song ‘Mohabbat’ in the Best Global Performance category. The Brooklyn-based Pakistani vocalist has also been featured on a billboard in Times Square, New York as Spotify’s artist of the month for their “EQUAL Pakistan” initiative.

Born to Pakistani parents in Saudi Arabia, Aftab spent her teenage years in Lahore before relocating to Boston’s prestigious Berklee School of Music to study musical production and engineering. She released her third studio album Vulture Prince to critical acclaim, and gained even more attention after former US president Barack Obama included the track ‘Mohabbat’ on his 2021 summer favourites list.

Aftab has performed at a number of major New York venues including Lincoln Center and the Museum of Modern Art, also opening for Mitski at The Brooklyn Steel in 2018.