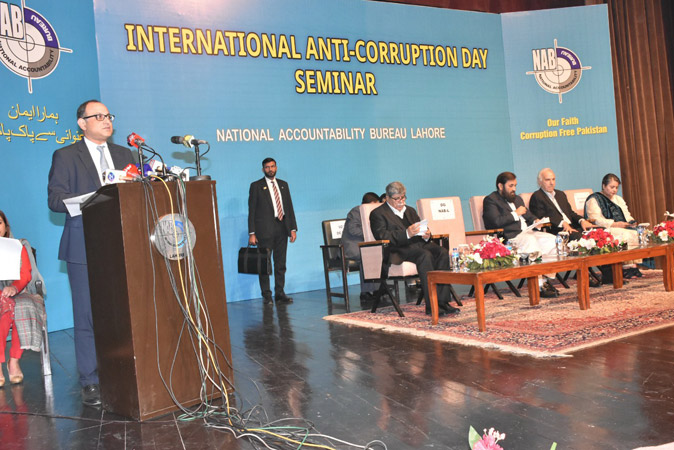 Special Assistant to Prime Minister (SAPM) on Accountability Irfan Qadir said on Thursday that the rule of law is a key factor for stable, broad-based economic growth as it encourages investments.

Addressing a seminar titled ‘corruption, the destruction of economy,’ organised by National Accountability Bureau (NAB) Rawalpindi to mark the International Anti-Corruption Day, he said the anti-corruption watch dog must not be used to advance political parties’ agendas.

He said that in the preamble of the NAB law, it is mentioned that the corruption is harmful to the economy. He said that there is no room for any sacred cow in the laws. Corruption cases are framed to score political points, to gain political advantage and to humiliate others.

In the past, he said innocent people were arrested or put in jails on false cases. He said that NAB has recovered billions of rupees which were looted by the corrupt elements and deposited the recovered amount in the national treasury.The recovery has helped strengthening the economy. He said that politics is being done in the name of new NAB laws, despite the fact that the detractors had themselves enacted those NAB laws. He said that NAB should ensure across the accountability of all and sundry sans and any discrimination. This will put the economy on the right path.

Government is ensuring that NAB should not be used for political purposes. Collective efforts will achieve greater success in the future.

Addressing the seminar, NAB Rawalpindi Director General Farmanullah pledged to continue fighting against the corrupt elements. The need is to collectively wage a Jihad against the corrupt elements in all circumstances. He said that reputable institutions such as Transparency International, Mishaal Pakistan, The United Nations Convention Against Corruption (UNCAC) have appreciated the performance and efforts of NAB.

He said that NAB is the last line of defense against corruption in the country.

“We have to make our society, especially the young generation and students, aware that corruption is a termite that would hollow out the foundations of the society and the country,” he said.

NAB Rawalpindi has recovered over Rs 368 billion and this year alone it has recovered Rs 763.694 million from corrupt elements and deposited the recovered amount in the national treasury or returned to the victims.

NAB Rawalpindi has received 4,770 complaints during the year 2022. As many as 44 investigations are under process while 135 corruption references are under trial.

The success ratio of NAB, Rawalpindi is more than 60 percent which is higher than any national or international investigation agency.

Addressing the seminar, FIA Director General Mohsin Hasan Butt said that NAB and FIA are committed to eradicate corruption from the country. He said that due to the anti-money laundering measures of NAB and FIA, Pakistan’s name has been successfully removed from the Financial Action Task Force (FATF).

Islamic Ideological Council Chairman Dr. Qibla Ayaz said fighting corruption also forms part of the Quranic principle of ‘prevention of evil’ (nahy ‘an al-munkar) which is a duty of the leader and those in charge of community affairs (uli’l-amr).

A large number of people from different walks of life attended the seminar.