* Currency reserves held by SBP recorded at $6.7 billion as of Dec 2
* Bank says debt repayments on track, foreign reserves to increase in 2nd half 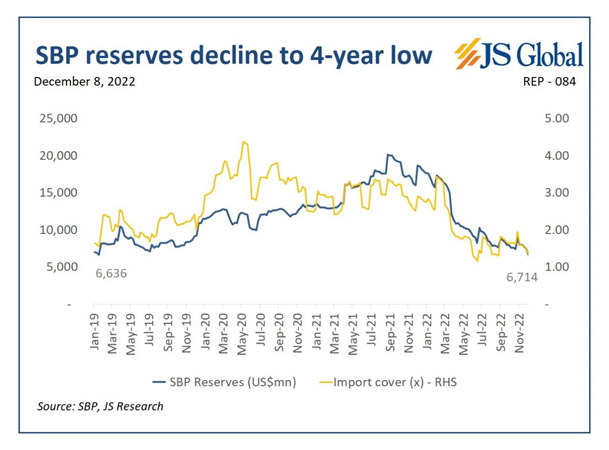 Foreign exchange reserves held by the State Bank of Pakistan (SBP) plunged to an alarming level after falling 10.45% to a four-year low.

The foreign currency reserves held by the SBP were recorded at $6,714.9 million as of December 2, down $784 million compared with $7,825.7 on November 25, data released by the central bank showed.

It should be noted that the country’s foreign exchange reserves have fallen below the $7 billion level for the first time since January 2019. The current reserves stand at around $6.7 billion – almost equal to $6.6 billion on January 18, 2019.

According to the SBP press statement, during the week ended on December 2, 2022, SBP reserves decreased by US$ 784 million to US$ 6,714.9 million. This decline was on account of the payment of US$ 1,000 million against maturing Pakistan International Sukuk and some other external debt repayments. Some of the debt repayments were offset by inflows, mainly US$ 500 million received from Asian Infrastructure Investment Bank (AIIB).

All debt repayments are on track and country’s foreign exchange reserves are expected to increase in second half of the current fiscal year, said Governor State Bank of Pakistan (SBP), Jameel Ahmad.

In the latest episode of the SBP Podcast series, Governor SBP discussed in detail the country’s capacity to meet its international financial obligations and addressed concerns over external account vulnerabilities.

He said, for the fiscal year 2023, around $33 billion were to be repaid to external stakeholders, including the Current Account Deficit (CAD) of $10 billion and $23 billion in loan repayments.Out of the payable $23 billion external debt, Pakistan has already repaid more than $6 billion whereas as a bilateral loan of $4 billion has been rolled over with the cooperation of relevant countries.

Another $8.3 billion maturing obligations are expected to be rolled over as discussions are underway. The remaining outstanding repayment stands around $4.7 billion for the remainder of this fiscal year. This includes $1.1 billion in commercial loans that have to be paid to foreign banks and $3.6 billion in multilateral loans.

He said Pakistan has received foreign exchange inflows of $4 billion (excluding the rollovers of $4 billion mentioned above). Pakistan will continue to make timely loans payments while inflows are expected to increase significantly in the second half of the current fiscal year.

Along with the rollover of some external obligations, Pakistan’s foreign exchange reserves are expected to increase significantly in the coming months. He said, during the week 28Nov-02Dec SBP reserves reached $7.9 billion after receipt of $500 million from AIIB .

During the week SBP paid US$ 1,000 million against maturing Pakistan International Sukuk and some other external debt repayments. Accordingly, Pakistan’s foreign exchange reserves stood at $6.7 billion as of December 2, 2022.

Earlier, the central bank had repaid two commercial loans totaling $1.2 billion. These banks are expected to refinance the same amount, in the coming days, helping to raise the country’s foreign exchange reserves.

The government is also in talks with a friendly country for the disbursement of a $3 billion loan and negotiations with multilateral agencies are progressing, for further financial support. He said, the debt profile of Pakistan is composed of bilateral and multilateral creditors and only a small percentage is owed to foreign banks.

SBP has enough reserves to repay all obligations in an effective manner and the inflows expected will boost forex reserves. He was of the view that globally, the war in Ukraine, a historic increase in international commodity prices and monetary tightening pursued by central banks are major challenges.

As a result of this, developing countries, including Pakistan are facing difficulties in raising funds from international financial markets. On the domestic front, the economy is impacted by floods which created challenges for Pakistan. Overall the situation is challenging; however, SBP and the government are taking measures to improve it.

He said, at the beginning of the fiscal year, SBP projected CAD to be $10billion for FY23, however, as Pakistan was hit by historic floods, this led to expectations of some increase in imports particularly that of wheat, fertilizers and cotton. Along with this, the country’s exportable crops were impacted due to floods and as a result, it was expected that Pakistan’s CAD will increase by US$2 to US$3 billion.

In the international market, however, some important developments have taken place including a decrease in the price of petroleum products. SBP has also taken policy actions that will reduce some outflows significantly. As a result of these policy interventions and other measures, it is expected that CAD will remain below $10 billion for FY23.

He said in the last quarter of FY22, SBP and government implemented some administrative measures to rationalize imports and improve the external accounts position. SBP placed restrictions on imports mentioned in chapters 84, 85 and certain items of 87. These restrictions covered about 15 percent of Pakistan’s total imports whereas no restrictions have been placed on 85 percent of imports.

Thereafter, SBP in coordination with the government identified 8 to 10 business sectors which were genuinely affected and needed relief. They were allowed to import 50 percent to 60 percent of their monthly average import payments made during January to June, 2022. Similarly, some importers reported cases of demurrages where LCs for imports were opened before the issuance of SBP restrictions. SBP in coordination with commercial banks resolved the issue and the backlog of payments were cleared. Further, some relaxations were also given after consultation with industry. Consequently, less than 10 percent of the country’s imports are currently subject to administrative controls.

All such restrictions are temporary and will be withdrawn gradually. He said, Petroleum and Pharmaceuticals are among the priority sectors for SBP adding there are absolutely no restrictions on the import of petroleum products, or on the import of raw material or inputs related to the pharmaceutical sector. He said SBP recognize that administrative measures on imports must not be continued and need to relax them gradually. From next year, the bank may review them and bring more ease to the businesses.