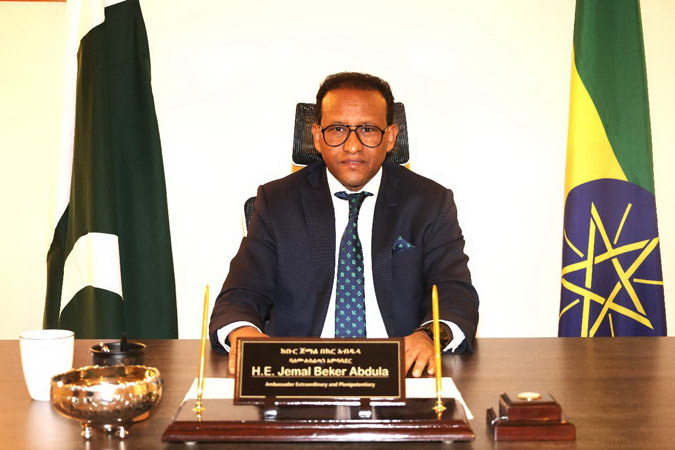 Ambassador Extraordinary and Plenipotentiary of the Federal Democratic Republic of Ethiopia to the Islamic Republic of Pakistan H.E. Jemal Beker Abdula on Wednesday appreciated the government of Pakistan for timely rolling out its “Engage Africa Policy’ to explore areas of mutual economic interest within the African continent through robust economic development and trade.

“It is my firm belief that the current century belongs to Africa which is emerging as a major destination for all the big investors around the world due to rapid pace of development and progress there,” the ambassador said while speaking at the Islamabad Conclave 2022. “Gone are the days when Africa was portrayed by the world as a gloomy and underdeveloped place, marred by civil wars and backwardness,” he said, adding the situation had been changed in the continent altogether.

He said Africa had undergone a lot of transformation shaping its own destiny and emerging as a land of opportunities. Since the beginning of 21st century, he said there had been a remarkable improvement in the governance style of African countries and political stability had become a hallmark of the continent with more democratic accountability and transparency within the governments. He said by 2050, a quarter of the world’s populations would be in Africa which would shape the planet earth’s future. “Africa’s unprecedented population growth will have impact on geopolitics, global trade, work force, and other dominant prospects,” he added.

Giving some recommendations for reaping the fruits of “Engage Africa Policy”, he called for establishing the institutional linkages between Pakistan and the African countries to boost bilateral, regional and multilateral cooperation for strengthening political, security, economic, social, and cultural ties. “It is also imperative for the Pakistani government to strengthen its relations with Ethiopia which is a gate way to Africa and connect the former with the latter,” he remarked.

He said Ethiopia was playing a leading role in pan-Africa since the colonial period and still had a strong legacy in shaping the political, socio-economic and regional integration while striving to achieve agenda 2063 of the Africa Union. Ethiopia, he said, was the founding member of the League of Nations, UN, OAU, African intercontinental free trade agreement and promoting free movement of people, goods and services across the continent. He said his country also owned the largest Pan-Africa Airlines with the name of Ethiopian Airlines.

He said Ethiopia attached great importance to advancing the bilateral relationship with Pakistan, and “opening of our mission in Islamabad reflects our commitment in this regard.” He said both Ethiopia and Pakistan shared similarities in many ways as both were heirs of ancient civilizations, influential diaspora and share social, cultural and political values. It had a federal system like that of Pakistan which held elections at regular intervals. He said Ethiopia was on upward trajectory registering a double-digit economy which had transformed the livelihood and well-being of its citizens. It had developed a home-grown economy as a result of the reforms initiated in 2018 led by Prime Minister of Ethiopia H.E. Dr, Abiy Ahmed, who envisioned to make the country a beacon of Africa’s Prosperity.

“Currently, the bilateral trade between the two countries is minimal and amounts to 78 million US dollars, however, my target is to take it to 200 million US dollars by the end of 2023,” he vowed. He said his country was powering its progress through cheap, clean and environment-friendly energy which was also being exported to other countries in the continent including Djibouti, Kenya and Sudan, connecting regional integration through energy. “My country has almost completed the Ethiopian Grand Renaissance Dam which is being built on the Nile River and set to produce 6,500 MW of clean electricity that can be sold at cheap price to neighboring countries and other regions.

He said a one-window facility was on the cards where the investors would have all the facilities for import and export under one roof.Ethiopia has been offering multiple incentives to the investors who would be exporting the products to other destinations after ensuring their manufacturing in the country, he added.