Afghanistan’s politics has not taken a positive direction largely because of the internal squabbling among the power contenders. The larger-than-life ambitions of the stakeholders in the spectrum of Afghan politics have resulted in a situation that could easily be exploited and turned in favour of the Taliban. The present circumstances have once again proved that the Afghans have still miles to cover before understanding that the stability of their country lies in accepting its ethnic and sectarian diversity. The results of the presidential election and the ensuing run-off have been prevented from becoming a powder keg by the US through an agreement over the addition of a parliamentary form of government that would result in an inclusive government. Under such a unity government, Abdullah Abdullah and Ashraf Ghani could run the government with shared power. The audit of the run-off ballot has been hampered many times and is still shrouded in doubt whether it could be completed successfully. The US Secretary of State John Kerry has visited Afghanistan twice since the presidential elections to keep the political temperature from boiling over. However, Ashraf Ghani, who was declared the winner in the run-off election results, has been paranoid over the definition of power sharing ever since. Abdullah Abdullah, who had won the initial round of the elections but could not get the required more than 50 percent of the vote that would have prevented the need for a run-off round, has shown magnanimity and requested his rival to keep to the agreed formula, but he too is now buckling under the pressure of his supporters. According to the latest reports, Atta Mohammed Noor, a powerful Afghan governor and militia leader, has warned of a “civil uprising” if the election audit fails to name Abdullah Abdullah the winner.

In July, the UN Mission in Afghanistan announced in its annual mid-year report that more than twice as many women and children had already been killed in 2014 compared to 2009 when the UN started recording civilian causalities. “The nature of the conflict in Afghanistan is changing,” said Jan Kubris, a UN special representative. On Eid the elusive Taliban leader, Mullah Mohammed Omar, issued a statement touting not only the strength of the Taliban but calling on Afghans to “join the ranks of the Taliban”. Addressing Afghan soldiers and police officers, he asked them to “come and wage jihad alongside your own people.” Afghan observers believe that the escalation in the killings of US/NATO soldiers recently at the hands of Afghan soldiers and police officers has been due to Mullah Omar’s call to jihad.

Afghanistan is once again on the brink of collapse, unless both Abdullah and Ghani put aside their personal ambitions and think about Afghanistan, which is caught up in the vicious circle of war for over 32 years now. And for the US, leaving Afghanistan without a stable government should be the last option. * 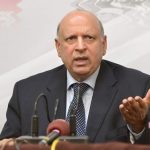