* While the ruling Trinamool Congress in Bengal has hit out at Rawal for his offensive comments, former Member of Parliament and CPI leader Md Salim has filed a complaint 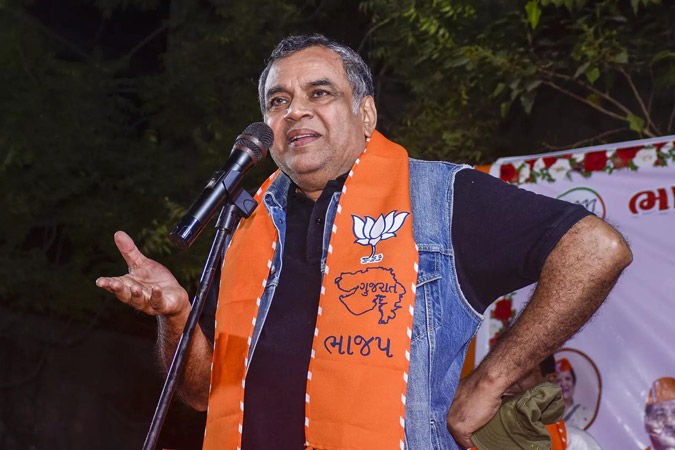 Bollywood actor Paresh Rawal has landed in hot waters with his viral comments on Bengalis while campaigning in Gujarat for the ruling party of India, BJP.

“Gas cylinders are expensive but they will come down. People will get employment too. But what will happen if Rohingya migrants and Bangladeshis start living around you, like in Delhi? What will you do with gas cylinders? Cook fish for the Bengalis?” Rawal was heard saying at the rally.

While the ruling Trinamool Congress in Bengal has hit out at Rawal for his offensive comments, former Member of Parliament and CPI(M) leader Md Salim has filed a complaint with the police.

At a rally, the actor turned politician said the people of Gujarat would tolerate inflation but not “Bangladeshis and Rohingya” next door and used a “cooking fish” stereotype that has incensed Bengalis. Salim has written to the Taltala Police Station in Kolkata asking them to treat his complaint as an FIR and prosecute the actor as his comments are generating adverse opinions against Bengalis.

“A large number of Bengalis reside outside the limits of the state. I apprehend many of them will be prejudicially targeted and affected because of the vicious remarks made by Paresh Rawal,” Md. Salim says in his letter to the police.

Paresh Rawal’s comments on Bengalis have created a storm in West Bengal with the ruling Trinamool Congress taking strong objection to his outburst.

Though the veteran actor made an effort to explain his comments with a qualified apology but ended up aggravating the row by claiming that he meant “illegal Bangladeshis and Rohingya” when he used the word “Bengalis”.

Many saw it as “hate speech” attacking Bengalis. Others described it as “xenophobic dog-whistling” against the Bangladeshi and Rohingya.

“So once again the politics of violence, hate, and division is out in the open. Renowned actor Mr Paresh Rawal who is a member of the BJP remarked about cooking fish for the Bengalis. I think this was utterly distasteful and a very insensitive remark. The BJP and the union government cannot tackle the rising prices of gas cylinders and inflation. But they turn around the problem and directed it this time to the Bengalis and their habit of eating fish,” Shashi Panja, who holds the portfolios of Industries, Commerce & Enterprises and Department of Women and Child Development and Social Welfare in West Bengal, said.

“Very unfortunate. So now you are targeting Bengal because as everybody remembers, you could not win in the 2021 assembly elections. You are yet to digest the defeat. You are unable to assimilate the mandate of the people. So now you are attacking Bengali food habits. People in Bengal, who live together with everybody will not take this lying down. The All-India Trinamool Congress once again condemns such kinds of statements, the statements of Paresh Rawal.” Dr Shashi Panja added.