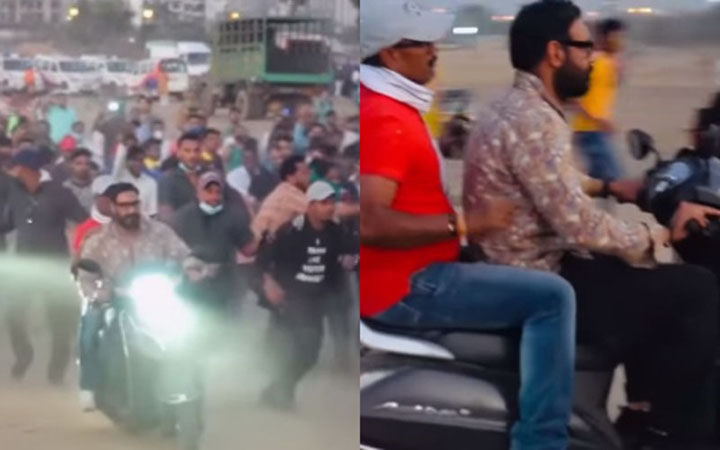 In the clip, Ajay is seen riding a scooter on a crowded open ground. Another crew member is seen sitting behind the actor for a ride. Ajay wore a shirt with black pants. The moment he started the scooter, Ajay was chased by a mob of screaming fans who ran behind him to record him with their smartphones. The people screamed and gave way to Ajay while filming his scene for the movie.

Sharing the video on Instagram, Ajay wrote, “It’s good when a mob chases you for the right reasons. Grateful for their (red heart emoji). PS- Always wear a helmet while riding. My head is bare because I was a part of the shoot. ” He used ‘Sets of Bholaa’ as the hashtag on the video.

Reacting to the clip, one of Ajay’s fan wrote, “It happens only in India (laughing emoji).” Another fan commented, “My superrr hero (red heart and smiling face with red eyes emojis).” Other wrote, “Wow, great my Singham.” “Ye sab paagal ho gye hai kya ?(Are these people have gone crazy)”, commented one person. “King of Bollywood,” another person wrote.

Bholaa will also star Tabu along with Ajay. Recently, the co-stars reunited for Drishyam 2 which saw them reprise their characters from Hindi remake of the 2021 Malayalam film of the same name. Bholaa will mark Ajay’s fourth directorial venture. The film is a remake of Tamil action thriller Kaithi. The 2019 original starred Karthi, alongside Narain, Arjun Das, Harish Uthaman, George Maryan and Dheena in the lead roles. Dream Warrior Pictures and the producers of Kaithi, will co-produce the Hindi remake of this film.