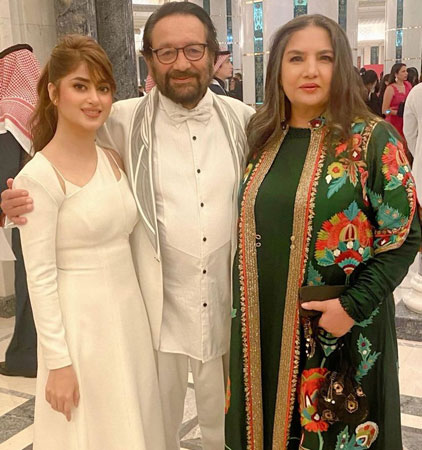 Indian filmmaker Shekhar Kapur has lauded Pakistani actor Sajal Ali, calling her a brilliant actor. The remarks came at the Red Sea International Film Festival. This is the second edition of Saudi Arabia’s biggest cinema event which kicked off on Thursday with Jemima Goldsmith’s upcoming movie, What’s Love Got to Do with It?

After the premiere, Indian filmmaker
and the director of the movie, Shekhar Kapur, introduced the cast and crew of What’s Love Got to Do with It?

While introducing the Khel Khel Main actor, Kapur called her one of the greatest actors of Pakistan.

He said, “Sajal, do you know when you first came on the screen at the first showing, every man in the hall gasped!”

The Mr India director then added, “She’s one of Pakistan’s greatest actresses, and she’s brilliant. Thank you very much, Sajal.”

The Behadd actor also shared a picture on her Instagram standing alongside Kapur and and Indian actor Shabana Azmi.

She captioned the picture, “My most favourite people. The LEGENDS.”

A while ago, Sajal attended the Filmfare Middle East awards, where she met Indian actor Jhanvi Kapoor, daughter of late Sridevi and her co-star from the Bollywood movie Mom.

The Pakistani actor received the ‘Most Popular Face of the Pakistani Cinema’ award at the ceremony.

Both, Sajal and Jhanvi also mentioned each other in their award acceptance speeches.

But it seems that Sajal has now proved, at least to the Indian film industry, that she
is a lot more than just a ‘popular face’ and that there is a lot of substance, talent and
skill of acting in her as well to shine on the global stage.