* Imran says if government disagrees, assemblies will be dissolved this month
* New army set-up should be given a 'chance'
* Ex-COAS played 'double game', giving him extension was biggest mistake 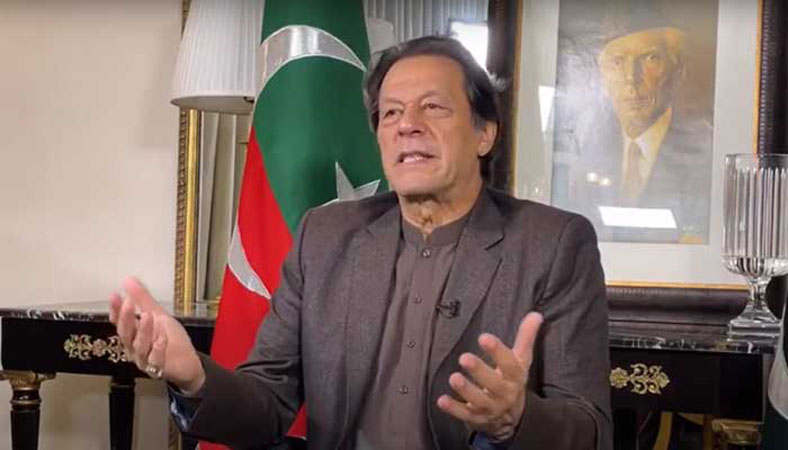 Pakistan Tehreek-e-Insaaf (PTI) Chairman Imran Khan Saturday expressed his willingness to halt the dissolution of the Punjab and Khyber Pakhtunkhwa assemblies if the coalition government agrees to conduct elections by the end of March next year, a private TV channel reported.

“If they are ready for elections by the end of March, then we won’t dissolve the assemblies. Otherwise, we want to conduct polls by dissolving the KP and Punjab assemblies,” Khan said in an interview with a private news channel. He added that his party won’t agree on a date after March and assemblies will be dissolved this month [December] if the government disagrees. “How long will they take to decide? They either have to say yes or no. We have already decided,” the former premier said underlining his conditional stance on talks with the government on the election date. He said the new leadership has been sent a message via Dr Arif Alvi that PTI only wants an independent country and a strong army. Commenting on PTI’s power in Punjab, the former premier said that the “game” is no longer in the hands of Pakistan People’s Party (PPP) Co-Chairman Asif Zardari as the Chief Minister of Punjab Chaudhry Pervez Elahi stands with the PTI.

When asked if CM Elahi has given him a signed summary, Khan said that the chief minister has given him full authority to dissolve the assembly whenever he wills. During the interview, the former prime minister also shared that he will be meeting his people from KP and Punjab in the next four to five days. For the first time since spending three and a half years with former chief of army staff (COAS) General Qamar Javed Bajwa, PTI chief said: “Giving extension to him [Gen Bajwa] was my biggest mistake.” “I would trust whatever ex-COAS General Bajwa said. I would tell him that both of us are [thinking about] the country; our purpose is one – to save the country,” Khan said. The former prime minister added that he didn’t know how he was being lied to and betrayed. “I knew during the last days and also received a report from the Intelligence Bureau (IB) about a game being played,” Khan said, adding that his informant from the IB would notify him verbally and not in writing following fears. “I trust people. I even tell my children that a brave man doesn’t suspect anyone,” Khan said.Referring to the alleged conspiracies against his government, the PTI chairman said that implementation of the game plan hatched against him began after the removal of Lieutenant General Faiz Hameed from the Inter-Services Intelligence (ISI). Accusing the ex-army chief of betrayal, Khan said that whenever he asked Bajwa about the conspiracy, he replied that they want continuity.

The former prime minister said that he complained to Bajwa that his allies were hinting that the army is forcing them to change their loyalty and you are saying that forces are “neutral”. He revealed that leaders from MQM-P and other parties had also told them about the ex-COAS Gen Bajwa’s role. “We were astonished that they were telling me something else and we were getting other signals from there [allies],” Khan said. Khan went on to say that granting an extension to General Bajwa was a “big mistake”. Commenting on his past decision, the former prime minister said: “Even then I thought no one in the military should be given an extension, but such circumstances were created that I had to take this decision. “After the extension decision, I felt that they [army] started talking to the PML-N.”