* Under Green Legacy Initiative, Ethiopia had planted some 25 billion seedlings in last four years to address climate issues out of which 500 million are avocadoes, mangoes and papaya 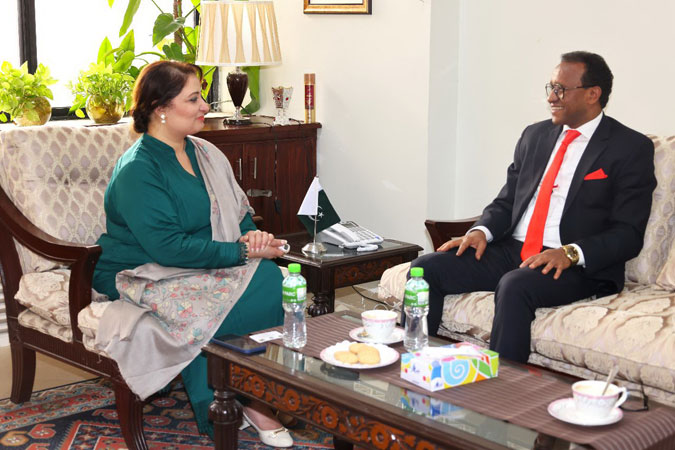 Ambassador Extraordinary and Plenipotentiary of the Federal Democratic Republic of Ethiopia to the Islamic Republic of Pakistan, H.E. Jemal Beker Abdula on Thursday said Ethiopia was keen to help the government of Pakistan in addressing the climate related issues which had caused great economic and human loss to the country in the form of floods in the recent past.

“We are ready to exchange knowledge, ideas and initiatives with the government of Pakistan by signing agreements on climate action,” he said during a meeting with Special Assistant to the Prime Minister and Minister of State H.E. Romina Khurshid Alam here at the Prime Minister’s Office.

He said the initiative had brought green revolution in the country through attitudinal, behaviour and cultural change. Under the Green Legacy Initiative, Ethiopia had planted some 25 billion seedlings in last four years to address climate issues out of which 500 million are avocadoes, mangoes and papaya, he added.

H.E. Jemal Beker said the climate change was not a myth but a reality and Pakistan needed to build a resilient economy by addressing its climate related issues. “I have visited the flood affected areas in Sindh where I met with flood affected people and distributed relief items among them.”

“Sharing their pain in such trying times is very important for me,” he remarked. The ambassador also requested H.E. Romina Khurshid, who is also Convener National Parliamentary Task Force on SDGs, to play a role in getting scholarships for the Ethiopian students in the prestigious universities of Pakistan.

To this end, the Convener National Parliamentary Task Force on SDGs assured the ambassador of her full support in joint climate actions and getting scholarships for Ethiopian students in the Pakistani varsities.

H.E. Romina Khurshid said she would be organizing a conference for promoting connectivity between the African region and Pakistan. She invited H.E. Jemal Beker to the conference as well. Both officials agreed to promote the mutual and collective interests of the two brotherly countries.