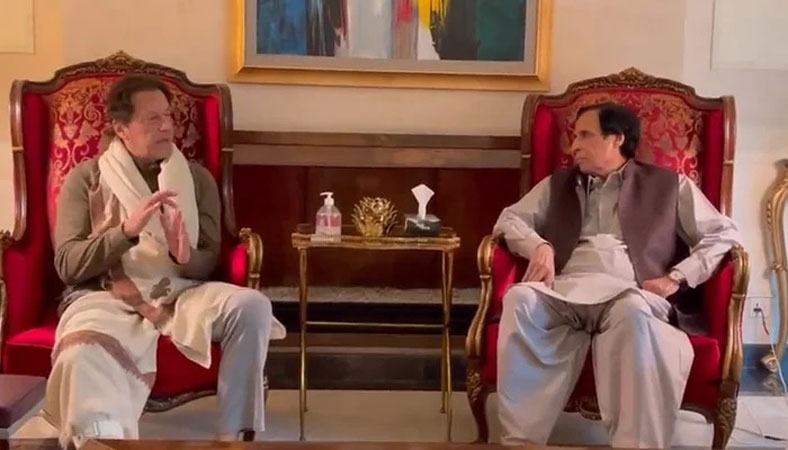 Punjab Chief Minister Chaudhry Pervez Elahi has assured PTI Chairman Imran Khan of standing by his side as the opposition in the provincial assembly mulls ways to overthrow the PTI-PML-Q-led coalition government in the province after former premier’s call to dissolve the assembly.

Taking to Twitter after the meeting, Elahi reiterated the same and said, “There will not be a moment’s delay when Imran Khan says to dissolve the PA.” He went on to say that the provincial assembly belonged to Imran. “We will support Imran’s every decision. We fully support those we choose to ally ourselves with.”

In another tweet, he reiterated that the Punjab government was standing with Imran. “Those creating misunderstandings will fail like they did in the past. Imran Khan is indispensable for Pakistan,” CM Elahi said. He also welcomed the idea of the opposition tabling a no-confidence motion in the provincial assembly. “It will fail like it did in the past.” “The opposition in Punjab has been beaten before and will face the same in the future,” he said, adding that the opposition did not have the requisite numbers for passing the no-confidence motion.

“Governor’s rule can also not be imposed when the PA is in session. It is my sincere advice to the opposition to go over the assembly’s Rules of Business before speaking,” Elahi said.

Separately, Moonis Elahi said the PTI chief had been assured that the PA would be dissolved at his call.

PTI leader Fawad Chaudhry, meanwhile, lauded the Punjab CM and Moonis for standing with Imran. The PTI leader said CM Elahi and his son had “increased the respect of family and friends”. “During difficult times, when people when people thought Elahi would change his decision under the establishment’s pressure, they stood steadfast with Imran.” In conversation with journalists after the meeting, PTI senior leader Pervez Khattak said that the meeting was good “overall” and that Khan would make the final call on all matters. “Chaudhry and us, we are all one. Khan sahib is our leader. All the decisions that have been made will be unveiled later,” the former KP CM said.

Khattak said both the leaders have reached a consensus on all matters and that CM Punjab has agreed to follow Khan’s decisions. “He [Elahi] stands by his words.” Earlier, Punjab Chief Minister Chaudhry Parvez Elahi held a meeting with former federal minister Pervaiz Khattak and discussed the matters about the Punjab Assembly and political situation. He also assured Khattak that they would counter the opposition. CM Elahi lambasted the coalition government, saying that the inept rulers had been sorted out. “They just cause uproar of the no-confidence motion or governor’s rule to please themselves.”

Elahi is in power in Punjab due to the support of PTI, whose chairman has announced plans to “quit the corrupt system and leave all the assemblies”. However, the PTI has yet to announce a date for dissolving the assemblies in Punjab and Khyber Pakhtunkhwa.

Over the weekend, Elahi had brushed aside concerns of any resistance from him regarding the move, acknowledging that he owed his government to Imran and would oblige to his instructions immediately.

The initial announcement of dissolving the assemblies had came during a mammoth PTI public meeting in Rawalpindi on Nov 26, Imran’s first public appearance since the assassination attempt on his life in Wazirabad. “We will not be part of this system. We have decided to quit all the assemblies and get out of this corrupt system and in this regard, I will soon hold meetings with the parliamentary groups and consult my chief ministers,” Imran had said.