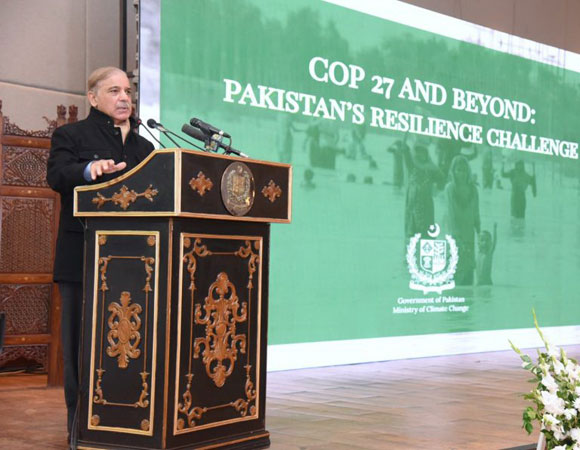 Prime Minister Shehbaz Sharif said on Thursday that many regions of the world are suffering from climate change and the recent floods in Pakistan have caused widespread destruction across the country, while Pakistan s share in carbon emissions is less than one percent but Pakistan does not want charity but climate justice. Addressing a ceremony organized in Islamabad on Thursday to pay tributes to all the stakeholders including international partners for successful climate diplomacy at Sharm-al-Sheikh climate summit, he appreciated the role of Foreign Minister Bilawal Bhutto Zardari, Climate Change Minister Sherry Rehman, Information Minister Marriyum Aurangzeb and other government departments that worked continuously for making the world believe that “we are seeking climate justice, not charity”.

Sharif said they also made the world realize that what has happened to Pakistan can happen with any other nation. The Prime Minister expressed deep gratitude to all those countries that came to help Pakistan with cash and kind during recent devastating floods. The Prime Minister said the contribution of all the friendly countries was most valuable in this hour of need.

Shehbaz Sharif, calling the Loss and Damage Fund a realisation of climate challenge by the global north, said it was however a must to practically implement the commitment as the disaster faced by Pakistan could also hit others in the future.

The prime minister told the world that what had happened in Pakistan would not stay in Pakistan. It necessitated seriousness towards the challenge of climate change.

“Our friends in the global north, they should and they have realised the importance of this challenge. That is why it has made a remarkable agreement at Sharm El-Sheikh. ‘Loss and Damage’ is now a reality. But then, it’s not about these agreements and understandings. It’s about practical implementation,” the prime minister remarked addressing the event held to acknowledge the ministers, government officers and experts whose efforts led to the agreement on the Loss and Damage Fund. He appreciated the efforts of all those involved for achieving “which was almost impossible.”

He said the unprecedented floods in Pakistan had affected 33 million, left 800 dead, and inflicted around $30 billion loss to the country’s agriculture, industry, infrastructure, and livestock.

He thanked the donor countries, organizations, and local philanthropists for supporting the flood survivors.

He also lauded the role of the provincial governments and government institutions for their efforts for relief and rehabilitation of the victims.

He said that “Loss and Damage was like a sleeping beauty for the decade” and for the first time, it was articulated by the team led by the ministers for foreign affairs and climate change. He said Pakistan had been seeking justice as it had faced which it had nothing to do with having less than 1% contribution to the carbon emission.

He also appreciated the role of diplomats, experts and other ministries including economic affairs, planning, information, and every Pakistani who contributed to making the world realise what happened to Pakistan.

Addressing the ceremony, Minister of State for Foreign Affairs Hina Rabbani Khar said Loss and Damage Fund was a “landmark event” because it was able to develop something which the developing countries had been pursuing for the last three decades.

She said the Fund would support developing countries like Pakistan to rebuild the destroyed infrastructure and achieve resilience.

“This is not about global south alone but rather all climate justice seekers both in north and south,” she remarked. She apprised the gathering of the concerted efforts made by the prime minister, foreign minister and diplomats at COP27 and earlier, as the urgency was felt more after the floods. She said the Fund was considered a major outcome of the COP27 and appreciated the flexibility shown by the developed countries which led to the agreement bringing a win-win situation for all.

Minister for Climate Change Sherry Rehman, who had been instrumental in the dialogue process at COP27, said resilience was key to a sustainable future and trajectory to growth.

She said the concerted public advocacy led to the agreement adding that it was all about climate justice, not charity as the developing countries lacked resources to deal with the climate change-induced disasters.

She said the situation would not stabilise unless the climate stress was addressed. She said the resilience was also a race against time, citing the seriousness of the situation caused by climate change in form of artificial lakes and flood-caused destruction.