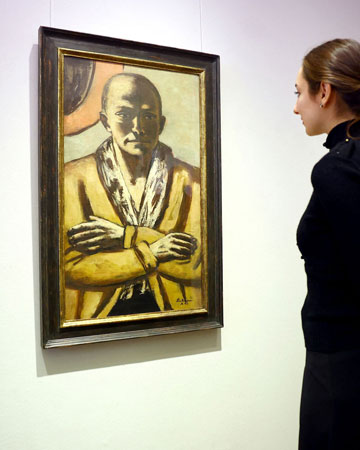 A striking self-portrait created by artist Max Beckmann during World War Two after he fled Nazi Germany is expected to fetch up to 30 million euros on Thursday, a record for a painting sold at auction in Germany. Auction house Villa Grisebach in Berlin estimates that ‘Self-portrait in yellow-pink’ will attract bids of up to 30 million euros. The self-portrait, painted in 1943, is a rarely seen masterpiece, Micaela Kapitzky, director and partner at Villa Grisebach, told Reuters. “The opportunity to buy a Beckmann self-portrait of this quality will not come up again. So it’s something very special,” said Kapitzky. Beckmann, widely viewed as a major modern artist of the last century, painted it in exile in Amsterdam. After the Nazis branded his paintings “degenerate art”, Beckmann and his wife, Mathilde, known as “Quappi”, fled Germany in 1937. Waiting in Amsterdam for years for a visa to the United States, Beckmann worked under adverse circumstances.