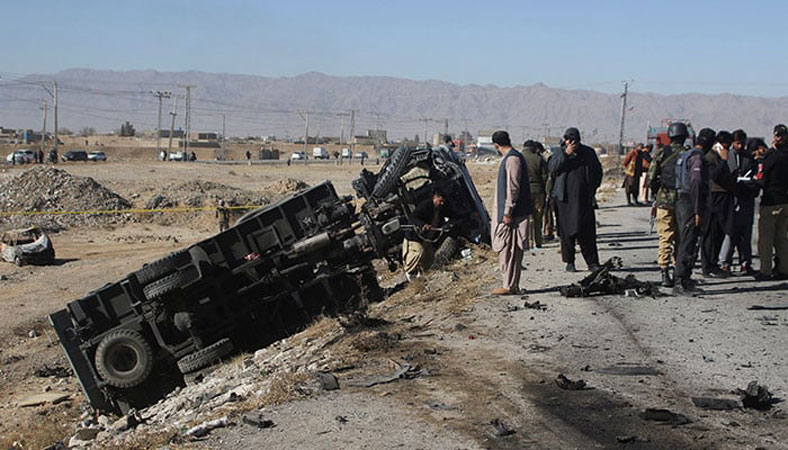 Four individuals, including a police officer and three civilians, died in a suicide attack near a Balochistan Constabulary truck in Quetta’s Baleli area on Wednesday, officials said. A suicide bomber targeted a truck transporting policemen for the security of polio workers during the ongoing drive, in Quetta’s Baleli area this morning, killed a cop and a child on the spot, and reportedly left 26 including 23 cops wounded. The death toll climbed as a woman and her child injured in the bombing succumbed to their injuries at different times, later in the day, the hospital administration shared. Both the deceased children were siblings, they added. The law enforcement agency said in the initial statement that a police truck was targeted in the explosion. They said that the injured cops and civilians were rushed to a nearby hospital. Police and rescue teams rushed to the site of the explosion as soon as the incident was reported. Assistance from the bomb disposal squad was also sought.Quetta Deputy Inspector General (DIG) Ghulam Azfar Mahesar, in a media talk at the crime scene, confirmed that the explosion was a suicide attack as they have found remains of a suicide bomber near the crime scene. He said that the police truck toppled due to the explosion and fell into a ravine. As per the DIG, three vehicles, including the police truck, and two nearby cars were damaged in the explosion.

He said that the police truck was moving the police personnel deployed for the security of polio workers for the ongoing drive. He further stated that around 20-25 kilogrammes of explosives were used in the attack. Inspector General Balochistan Abdul Khaliq Sheikh said that the “terrorists launched a cowardly attack on the police force”.

He said that such attacks will not lower the police’s morale. “Protecting people’s lives and property is our job. Our morale high and our determination is strong,” the IGP said. Interior Minister Rana Sanaullah, while condemning the attack, shared that the he has summoned a report of the incident from the Balochistan Government. The security czar of the country said that target of the blast were the police party.

Prime Minister Shehbaz Sharif and President Arif Alvi condemned the terrorist attack in separate statements. PM Shehbaz Sharif ordered an immediate probe into the matter and issued directives for the provision of the best medical assistance to the injured. “Polio workers are performing their duties to eradicate this disease [polio] without fearing for their lives. Complete eradication of polio is among the first priorities of the government,” PM Shehbaz said.

He further stated that the evil elements will keep failing in stopping the polio eradication campaign as the Pakistani nation and LEAs will not let their efforts become successful. Meanwhile, President Alvi expressed grief over the loss of lives. “Children are our valuable national asset and future. We are determined to keep the children safe from a disease like polio,”he said, while pledging to continue the polio eradication efforts till it is completely wiped off from the country. The president also paid tribute to the police and polio workers and prayed for the forgiveness of the deceased and recovery of the injured.