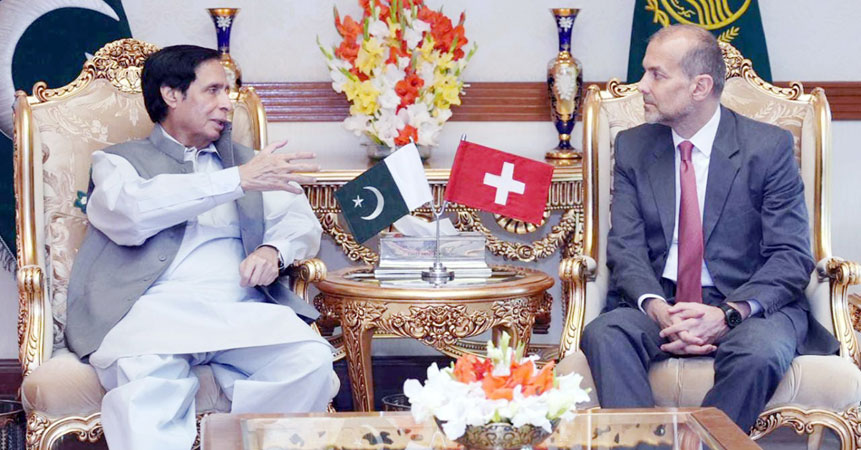 Chief Minister Punjab Chaudhry Parvez Elahi met with the Ambassador of Switzerland Mr. Georg Steiner at his office today in which matters pertaining to mutual relations and enhancement of bilateral trade came under discussion. It was agreed to increase cooperation in hydroelectricity projects, dairy farming, climatic changes and tourism sectors. The Swiss Ambassador gave assurance to provide assistance to the Punjab government in hydroelectricity projects. CM Parvez Elahi while talking with the Swiss Ambassador said that the Punjab government has formulated a plan to establish hydel projects on the Chenab River. The destruction being caused due to flood can be prevented due to hydel projects and water can also be accumulated for agricultural purposes with the construction of said projects. We would welcome the cooperation of Switzerland companies in the construction of hydel projects. The Chief Minister stated that Pakistan is highly affected due to climatic changes adding that there is a dire need to undertake concrete measures at the international level in order to cope up with the detrimental effects of climatic changes. CM disclosed that special economic zones will be established for the promotion of foreign investment in Punjab.

The investors will be provided facilities on preferential basis in the special economic zones. All utilities including tax exemption will be provided in the special economic zones. CM urged the Swiss investors to generously invest in the special economic zones adding that the Punjab government will ensure to provide complete support and protection to the investors investment. CM apprised that Punjab government has given a final shape to the corporate farming policy adding that the Swiss companies can benefit from the special measures being made for the investors under the corporate farming policy. The Chief Minister stated that ups and downs do come in the political scenario but sustainability of policies remains intact for the investors. The Switzerland Ambassador extended an invitation to the Chief Minister to visit Switzerland and stated that Punjab is an important province and is swiftly heading forward under his able leadership. The Ambassador stated that he is pleased to know about high quality production of commodities is being produced in the factories of Punjab. The Swiss Ambassador further remarked that the vision of Chief Minister Parvez Elahi is commendable with regard to promoting business cooperation adding that we would undertake durable measures in order to enhance cooperation in various sectors of Punjab. Senior Political Advisor Usama Qaiser Khan, Former Federal Secretary and Chairman P&D Salman Ghani, Former Principal Secretary to CM GM Sikandar, SMBR, Secretary P&D, CEO PBIT and concerned officials were also present on the occasion.

Chief Minister Punjab Chaudhry Parvez Elahi announced to launch the second phase of the Lahore Press Club housing scheme while chairing the 10th meeting of the Punjab Journalist Housing Foundation’s board at his office on Wednesday.

The CM explained that land would be given in the tehsil Cantt where 500 kanals would be reserved to allot 5 Marla plots in the Ashiana Housing Scheme. In the meeting, the illegal allotment of 15 plots in LPC’s B-Block was cancelled and CM stressed that the plots would be transparently allotted to the rightful persons of B-Block. He also directed the police to evict the illegal occupants from the Press Club housing scheme’s B-Block and assured that the affectees of B-Block will be given their right. He called a meeting to resolve the problem of affectees of B-block at the earliest. The chief minister asked for recommendations for the Faisalabad Press Club housing scheme and added that 468 plots of five Marlas each would be given in this scheme.

He waived off Rs.35 crore interest amount which the PJHF had to pay to the finance department as dues. He announced plans to launch journalist housing schemes in other districts in phases and noted that a housing scheme was established for journalists 18 years ago. Hundreds of plots have been given to journalists in Lahore, Rawalpindi and Multan to fulfil the dream of owning a house, he concluded.

Chief Minister Punjab Chaudhry Parvez Elahi has, in principle, approved to operate the 513 hybrid/electric buses in Lahore while chairing the 19th meeting of the Punjab Masstransit Authority at his office. He ordered to arrange more buses for feeder routes in Lahore along with an expansion of the Speedo feeder bus service from Lahore to Sheikhupura and Muridke to accommodate the periphery localities.

The CM ordered the revival of the Punjab Transport Company and approved the repair and maintenance of buses of the Pakistan Metrobus System in Rawalpindi/Islamabad along with the procurement of new buses. Similarly, it was decided, in principle, to continue the Bahawalpur-Lodhran bus service and addition of 12 buses to the fleet.

The CM said that eight stations of the orange line metro train would be commercialised along with improvement in Lahore Metrobus System. The janitorial services of Pakistan Metrobus Service in Rawalpindi/Islamabad would be given to Rawalpindi Waste Management Company, he noted. The meeting decided to acquire the services of NRTC for automatic fare collection and bus scheduling system and also approved an amendment in the contract for the repair and maintenance of buses of the Lahore Metrobus System. The insurance of the orange line metro train system and ex post facto approval of the decision to give 15 buses to CDA were also endorsed.

Chief Minister Punjab Chaudhry Parvez Elahi has strongly condemned the Quetta blast and expressed a deep sense of sorrow and grief over the loss of lives. He extended heartfelt sympathies to the bereaved families and prayed for the speedy recovery of the injured. Our sympathies are with the bereaved heirs and the nation is united for the eradication of terrorism, he added.