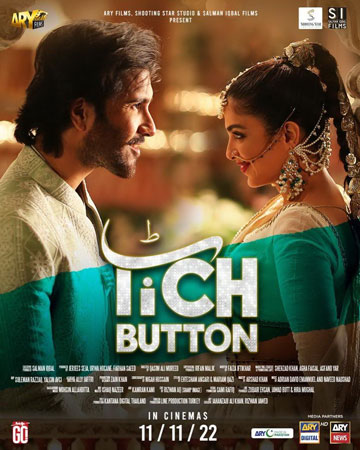 The hotly-anticipated musical entertainer ‘Tich Button’ of ARY Films has finally hit the worldwide Box Office. The film marks the debut of A-list actor Urwa Hocane as a producer.

After a series of Pandemic delays, ‘Tich Button’ finally debuted in worldwide cinemas over the past weekend. The rom-com flick scored a massive debut weekend on the ticket windows across the globe.

The masala entertainer was a hot favourite among cinegoers and managed to cross the Rs 5 crore mark with the opening weekend ticket sales. Along with stellar Box Office numbers, the film has been receiving rave reviews from audiences.

The musical entertainer follows the story of “Kaka, a young man, who helps Saqib when he refuses to marry his cousin Shakila. As a result of this refusal, complications kick in and a pile of lies generate. As the story unfolds, Leena, a girl from Turkey enters this triangle and what follows is a story of mishaps and love.”

Urwa Hocane marks her production debut with the film, and is joined by Jerjees Seja and Farhan Saeed as co-producers. President and CEO of ARY Digital Network, Salman Iqbal is the Executive Producer.