Politics on the go 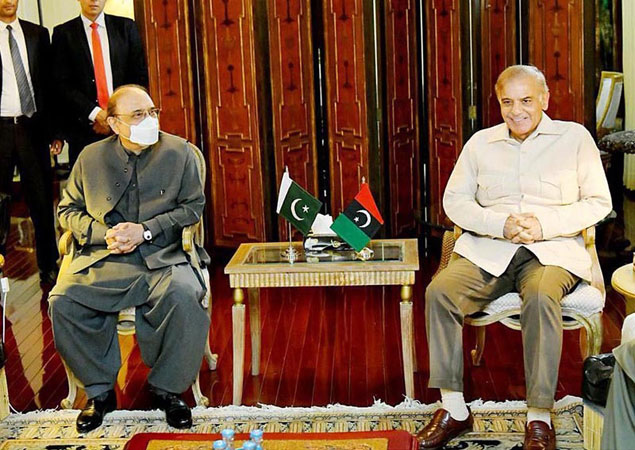 Hectic political activity was witnessed in the country for the second day on Tuesday in the wake of announcement of dissolution of Punjab and KP assemblies by former prime minister and Pakistan Tehreek-e-Insaf Chairman Imran Khan at a rally in Rawalpindi.

The PML-N and PPP are making hectic efforts to save the Punjab Assembly after the senior PTI leadership greenlighted former prime minister Imran Khan’s decision to quit all assemblies to force an early election.

Former president Asif Ali Zardari met Prime Minister Shehbaz Sharif at the PM House wherein two leaders exchanged views about country’s developing political situation. The two leaders of the two major parties part of the ruling coalition put their heads together on finding a solution to the threat by Imran Khan to dissolve provincial assemblies. They deliberated on various options to foil Imran’s plans, including moving confidence motions and dissolving the assembly. It was decided that attempts must be made to control the uncertainty in Punjab and to proceed through mutual understanding after evolving consensus.

The meeting between senior leaders of the two coalition parties came after a similar meeting at the provincial level were held in Lahore earlier in the day.

After holding another round of talks with the coalition partner PPP, PML-N’s Attaullah Tarrar Tuesday said that the opposition parties in Punjab will reveal their strategy in a day or two to counter PTI’s bid to dissolve the provincial assembly. “When the resolution comes from the National Assembly and the Senate and goes to the President, the governor’s rule can be imposed,” the PML-N leader said.

On Tuesday, a PPP delegation, headed by PPP parliamentary leader in Punjab Assembly Syed Hassan Murtaza visited PML-N’s secretariat where both parties discussed the evolving political situation.Speaking to the media after the meeting, SAPM Attaullah Tarar said that the PPP leaders met with Hamza Shehbaz on the directions of Asif Zardari as part of the consultative process. “We exchanged views on no-trust motion in the Punjab Assembly,” Tarrar said, adding that they will use all options to stop PTI from dissolving the assembly. “If the Punjab Assembly is dissolved at the behest of Imran Khan, it will be unconstitutional.”

Tarrar said that the assembly should complete its tenure and warned the ruling party from robbing people of their mandate. “Various options have been discussed in detail. The government members of the Punjab Assembly are also anxious over the developments and several MPs are also in touch with us.” He claimed that the parliamentary party of PTI is disintegrated. According to the law, no member can be prevented from tabling a no-confidence motion or from voting on it, Tarrar said. After further consultation, all the coalition parties will announce in a day or two, he further said.

Speaking on the occasion, PPP leader Hassan Murtaza thanked the leadership of PML-N for including allies in the consultation process. It is clear now who wants to strengthen the parliamentary system and who wants to weaken it, Hassan Murtaza said. “PPP will stand side by side with its allies.” He also questioned the reason behind dissolving assemblies.

Reacting to the development, Punjab Chief Minister Chaudhry Pervaiz Elahi said imposing governor’s rule or bringing a no-trust motion in Punjab will remain a distant dream of the opposition. The provincial assembly will run as per the Constitution and not at the whim of someone, he added.

Pervaiz Elahi said the opposition should keep in mind that the provincial assembly will run as per the rules and the Constitution. He highlighted that the popularity of the former premier Imran Khan has increased manifold. Imran has raised awareness among the masses about self-esteem, he said. “The unnatural alliance of 13 political parties is breathing its last,” he maintained.

The chief minister said the incompetent rulers have ruined the lives of common citizens and the time is not far when these rulers will start fighting with each other. He underscored that Imran Khan’s politics is beyond his personality and personal gains contrary to the current rulers of Islamabad. “We will continue to support Imran Khan as we did in the past,” he maintained.

In another interesting development, PTI Senior Vice President Fawad Chauhdry met US Ambassador Donald Blome at the US embassy in Islamabad, a private TV channel claimed. Both sides discussed the country’s prevailing political situation in detail in an hour-long meeting, the TV channel reported.