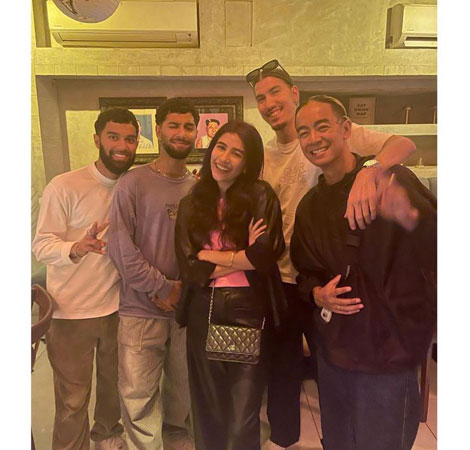 On Sunday, the Sinf-e-Aahan star took to Instagram and posted a group photo of her along with Norwegian dance troupe, all smiling as they posed for the camera.

In a photo, the Chalay Thay Saath actress looked gorgeous in a pink tee which she paired it with black overcoat and black pants. Moreover, she accessorised her look with a golden bracelet and black sling bag.

In the caption, she wrote, “Love ’em,” as she tagged all four members from the crew including @sulllyquick @billiquick @nazquick @yasintatby.

Anoushey Ashraf, a host and former VJ, dropped heart-shaped and heart-eye emojis in the comment section.

Fans also shared their reaction as one said, “My favourites in one frame.” Another added, “We want a dance collab.”

According to reports, Quick Style landed in Karachi last week as Coke Studio announced a nationwide tour of the dance group. Meanwhile, the dance crew drew attention earlier this year with their viral wedding dance sequences on different songs including Coke Studio’s Kana Yaari as well.