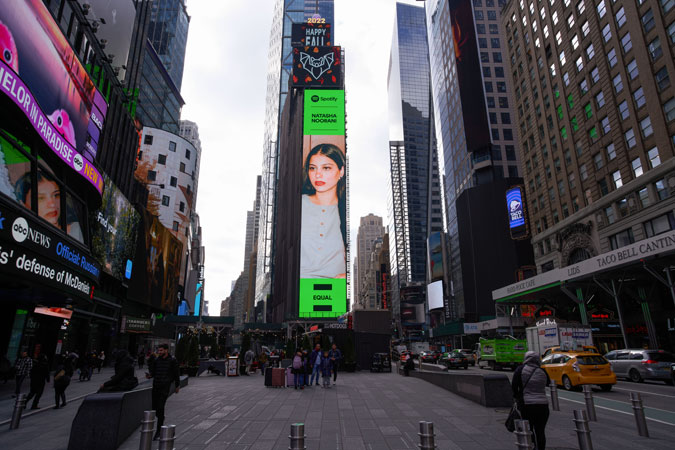 A woman adorning many hats but most recently creating waves in the ocean of Pakistani music, Natasha Noorani has been introduced as EQUAL Pakistan’s Ambassador for the month of November.

Like all ambassadors before her, Natasha was featured on a digital billboard at Times Square, NYC with her track ‘Laiyan’ also being featured on Spotify to celebrate the occasion.

Natasha Noorani is another musical sensation rapidly rising through the realms of popularity within Pakistan’s musical ecosystem. Before her musical career took off, Natasha laid the founding stone for the premier of Lahore Music Meet which has successfully completed 5 iterations so far. Her solo EP, Munaasib is inspired by R&B, neo-soul and prog-rock while at the same time, soundtracks recorded by her have made it to films like Baaji and Chalay Thay Saath.

“It’s an immense honour for me to be Spotify’s EQUAL Ambassador for Pakistan. It feels like a beautiful celebration of my journey as a musician up till now and I am so excited to showcase more of my music to a larger audience. Spotify is putting in the work to create space, especially digital, that supports more female creators in Pakistan and I’m thrilled to be a part of it,” Natasha commented reflecting on her excitement on becoming a part of EQUAL Pakistan’s roster of ambassadors.

A part of the band, Biryani Brothers, and having collaborated with the likes of Strings, Abdullah Siddiqui, Hasan Raheem, Talal Qureshi and Jamal Rehman, Natasha has garnered a significant following for herself.

Spotify transformed music listening forever when it launched in 2008. Discover, manage and share over 80 million tracks, including 4.7 million podcasts, for free, or upgrade to Spotify Premium to access exclusive features for music including improved sound quality and an on-demand, offline, and ad-free music listening experience. Today, Spotify is the world’s most popular audio streaming subscription service with 456 million users, including 195 million subscribers, across 183 markets.