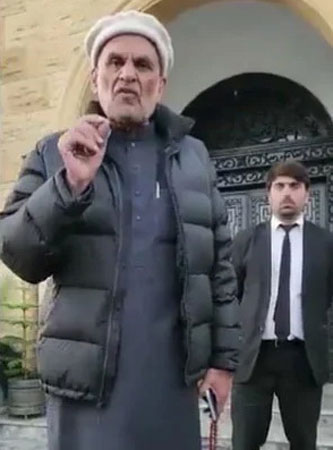 A local court in Islamabad on Sunday handed over the Pakistan Tehreek-e-Insaf (PTI) Senator Azam Swati to the Federal Investigation Agency (FIA) on two-day physical remand in a case relating to ‘controversial’ tweets targeting institutions.

Judicial Magistrate’s duty judge Waqas Ahmed Raja heard the case of Azam Swati, who was arrested earlier in the day, and announced the reserved decision on the FIA request for physical remand. Advocates Babar Awan and Faisal Chaudhry appeared before the court on behalf of the former ruling party. During the hearing, the investigation officer implored the court that there are some controversial tweets that led to the arrest of the senator, adding that a narrative is being prepared against state institutions. He informed the court that a first information report (FIR) has been registered against the PTI leader on this issue.

“He has not denied the tweet. He has committed this offense for the second time,” the investigating officer said. Babar Awan stated that the tweets made do not meet the provisions of the FIR, adding that the statement taken by the police has no legal status. “Swati’s statement of [Section] 164 was not taken into consideration. He was brutally tortured last time. He still hasn’t recovered from the torture,” he added.

The PTI advocate further told the court that the effects of physical and mental torture on Swati still remain, adding that this is not the rule of law, “it is a mockery and the murder of the law”. The lawyer furthered that there is a threat to the senator’s life. He then told the court to take assurance from the FIA that if anything happens to Swati in their custody, they will be responsible. “Name of FIA people present here should be put in the order sheet,” added Awan. Senator Swati was taken into custody for the second time early Sunday morning after a raid at his farmhouse by the FIA Cyber Crime Wing Islamabad team for allegedly tweeting against senior military officials.

An FIR against Swati was registered by the cybercrime wing on November 26 over ‘controversial’ tweets made recently allegedly against government functionaries, including the chief of the army staff (COAS). The report maintained that the PTI leader started a “highly obnoxious campaign of intimidating tweets” against state institutions, including the army chief “with malafide intentions and ulterior motives”. In a conversation with the FIA team during the arrest, Swati said, “FIA officer Ayaz is my culprit, I don’t want to see him here” as the PTI leader had accused the official of torturing him following his previous arrest in October. The senator also said that as soon as he delivered his speech at the party’s rally in Rawalpindi, he came back home, adding that he was “not one to run away and was not going to Khyber Pakhtunkhwa”.