Pakistan urges world to step up against climate change 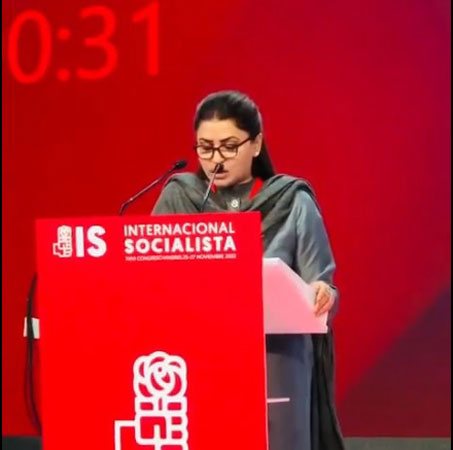 Federal Minister for Poverty Alleviation and Social Safety and Chairperson BISP Shazia Atta Marri on Sunday emphasised that the future of earth in all aspects depends on addressing the issue of climate change.

She was speaking at the meeting of the 26th Socialist International Congress held in Madrid, Spain. In her speech, she expressed solidarity with the women and children affected by the wars and conflicts globally and also highlighted the catastrophic impact of climate change in Pakistan in detail.

Shazia Marri while addressing the Socialist International Congress said, “We are expressing solidarity with the women and children of Palestine, Jammu and Kashmir and all around the world where they were being tortured and harassed as the result of the wars and conflicts.”

“A few years back, many around the world including Socialist International members were debating on the issue of climate change, as the debate continues, the climate-related disasters kept wreaking havoc around us,” she added. She said that climate change had become a reality and hoped that the global community, which was now showing some seriousness towards it, will take some real actions this time.

Shazia Marri said that it was important to understand that climate change was not just an environmental issue if we take the example of recent floods in Pakistan. “Climate change is a threat to health, livelihood, agriculture, peace and security and the overall economy of the world,” she said.

The minister added that climate change is a threat beyond the imagination of the common man, but the truth is that the future of our planet in all aspects is dependent on addressing the issue of climate change.