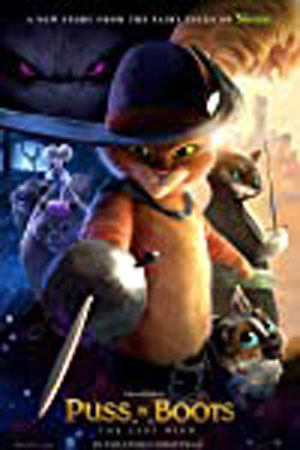 It’s been nearly two decades since the adorable Puss made his screen debut in Shrek 2 and 11 years since his starring debut, and he’s worse for the wear. In an elaborate action sequence that opens his new animated adventure Puss in Boots: The Last Wish, he gets killed. That normally wouldn’t be a problem for a cat with nine lives, except that Puss has now lost eight of them.

Naturally, that prompts a visit to his concerned physician (Anthony Mendez), who advises him to adopt some lifestyle changes. Like retiring and not dying anymore. He also attempts to take Puss’s temperature, and not orally. The feline naturally demurs, assuring his doctor, “Trust me, I run hot.”

Puss (Antonio Banderas) has a more immediate solution to his problem. With the help of his former girlfriend and occasional foil Kitty Softpaws (Salma Hayek Pinault, also reprising her role), he heads into the Black Forest in search of the mythical Wishing Star that he hopes will restore his squandered lives.

If you’re wondering how he lost so many, screenwriters Tommy Swerdlow and Tom Wheeler vividly illustrate the causes of his many demises in a hilarious montage that illustrates the frequent wit on display in DreamWorks Animation offerings. Not all of those deaths are heroic, as demonstrated by his gluttonous losing battle with a shellfish allergy.

Puss and Kitty head into the forest, accompanied by Perrito (Harvey Guillen), a mangy, aspiring therapy dog whom Puss meets when he takes temporary refuge in the overpopulated home of an obsessed cat lover (Da’Vine Joy Randolph). Many adventures ensue, with the trio forced to contend with such nefarious characters as a teenage Goldilocks (Florence Pugh) gone bad; a very mature, oversized Jack Horner (John Mulaney, who, through the magic of engineering, sounds big here), now an underworld kingpin; and a crime family consisting of Momma Bear (Olivia Colman), Papa Bear (Ray Winstone) and the not-at-all diminutive Baby Bear (Samson Kayo). Meanwhile, Puss is being pursued by the fearsome bounty hunter Wolf (Wagner Moura), the visual personification of the mortality that haunts him. 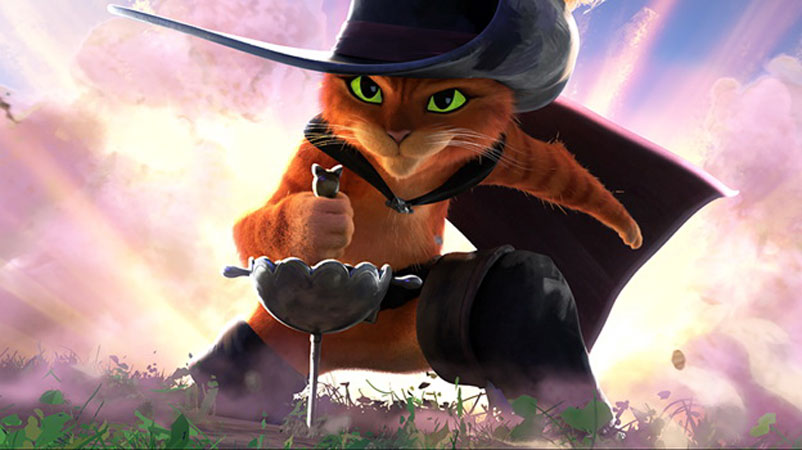 Darker in tone but still extremely funny, the film, like so many of its animated brethren, falters when resorting to the frenetic action sequences seemingly designed for tykes’ short attention spans.

Those exhausting episodes pale in comparison to such uproarious scenes as a saucer-eyed feline face-off in which Puss attempts to prove he’s the most adorable.

Puss in Boots: The Last Wish looks great, but what really makes it work is Banderas’ silky-voiced turn, conveying all of the character’s over-the-top feline suavity while making it clear that he’s very much in on the joke. Too often, animated films feature supremely overpaid and overqualified voice casts whom children, and most adults, couldn’t care less about. Banderas, on the other hand, is worth every penny.