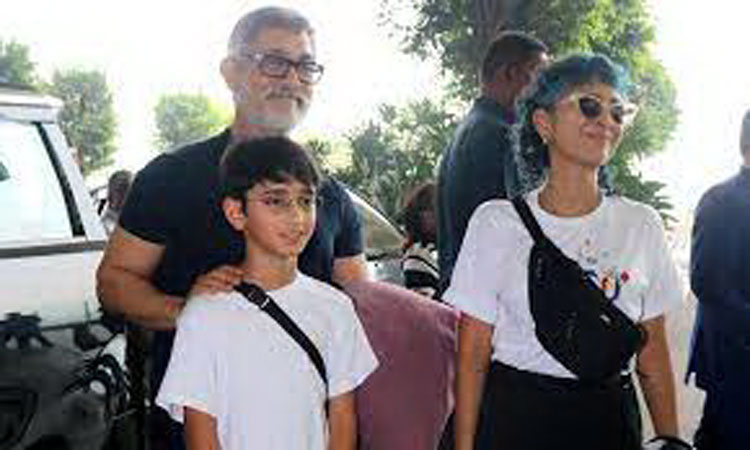 Actor Aamir Khan was on Thursday seen arriving at Mumbai airport. The Bollywood Mr perfectionist was seen along with his wife Kiran Rao and their son Azad Rao Khan. This marks the family’s first appearance since Aamir’s daughter Ira Khan got engaged to her long-time boyfriend Nupur Shikhare. Aamir was seen sporting a salt-and-pepper look and won his fans’ hearts as the trio jetted off the city to an unknown destination.

Aamir, along with Kiran and their child, was happily seen posing for the photographers. The actor was seen donning a blue tee and black trousers along with black sneakers. He was also seen carrying a pillow along with him. Kiran, on the other hand, was seen in a white t-shirt and a black skirt while Azad looked adorable as he twinned with her in a colour-coordinated outfit.

Viral Bhayani shared a video featuring the trio as they were clicked at the Mumbai airport.

Aamir Khan and Kiran Rao announced their separation after 15 years of marriage. Aamir was previously married to Reena Dutta, with whom he shares a daughter Ira and a son Junaid Khan. The two divorced after 16 years of marriage.

In terms of work, he was last seen in ‘Laal Singh Chaddha’, which didn’t work at the Box Office. He will be seen in a cameo appearance in Kajol’s upcoming film ‘Salaam Venky’.