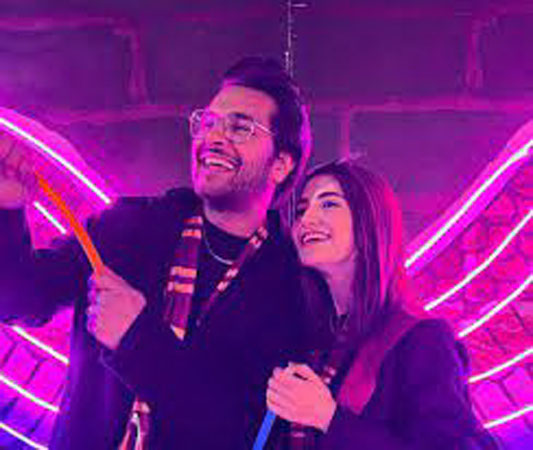 The ‘Sinf-e-Aahan’ actor turned to her Insta handle, Tuesday, and posted a new singing reel with Pakistan’s heartthrob singer Asim Azhar. He played the music on guitar and crooned to the hit Bollywood track ‘Bol Na Halke Halke’ from a musical rom-com ‘Jhoom Barabar Jhoom’

Azhar was later joined by his fiance Merub Ali in the viral reel.

Millions of the young couple’s fans on the social platform showered their love on the video with numerous likes and heartwarming comments for the duo.

“His voice is literally so soothing and magical,” wrote a social user, while another Instagrammer suggested that the couple ‘should do a collab together’.

Another fan complimented that Merub has quite a ‘soothing’ voice.

It is pertinent to mention that Asim Azhar and Merub Ali announced their engagement on social media earlier this year. The two simultaneously shared glimpses of the close-knit affair on their respective social media handles and wrote: “With the grace of Allah Almighty and our parent’s duas, we announce our Imam Zamin – engagement.”

The singer-actor duo, last seen together in the blockbuster serial ‘Sinf-e-Aahan’ have been childhood friends and often made public appearances before making their relationship official. Merub threw a grand birthday bash as well for then-friend Asim on his birthday last year.