* Says if PM can consult a 'fugitive', why can't President Alvi discuss it with party chairman
* Nov 26 will be the biggest gathering in the country's history 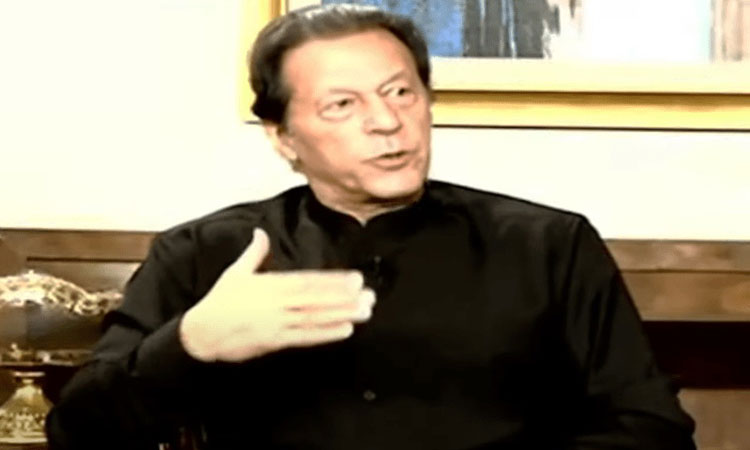 Former prime minister and Pakistan Tehreek-e-Insaf (PTI) Chairman Imran Khan on Wednesday said that President Arif Alvi is in touch with him and will consult on the summary of the appointment of Chief of Army Staff (COAS).

The statement came a day after the General Headquarters (GHQ) confirmed that it forwarded the summary containing the names of six senior-most lieutenant generals to the Ministry of Defence that would pave the way for a smooth transition in the army’s top command.

The PMO also confirmed earlier this morning that it had received the summary for the COAS’ appointment. The new army chief will take charge on November 29 as the incumbent General Qamar Javed Bajwa would doff his uniform the same day after completing six years in office. “President Arif Alvi is in touch with me [regarding the COAS appointment]. Whenever he gets the summary, he will consult me,” Imran said during an interview with a private TV channel.

“We don’t know who they will appoint but the president and I have decided that we will play [with this] within the law and do whatever is in law and Constitution.” When asked if the matter can be taken to the Supreme Court, the Imran replied: “I can’t say.”

The former premier said that if the incumbent prime minister can consult “fugitive” – a reference to former PM Nawaz Sharif – then why can’t Dr Arif Alvi discuss the all-important appointment with him as he’s the party chief?

“I don’t know how much truth there is in the words of former spokesperson of Pakistan Muslim League-Nawaz based in London Tasneem Haider. We will not do anything that is against the law,” he said.

Imran Khan argued that whoever is appointed as the next army chief by PML-N supremo Nawaz Sharif will become “controversial” from the first day. Explaining further, he said that that individual would become “Nawaz Sharif’s man”.

Imran said that he does not doubt [the credibility of] whoever would be chosen as the army chief, saying that he instead was suspicious of the intentions of those who would appoint him.

“If Nawaz Sharif thinks he can bring his army chief and get us beaten by the establishment then the nation will stand against it.” Imran Khan has predicted that the party’s activities in Rawalpindi on November 26 will be the “biggest gathering” in the country’s history. He said a “sea” of the public would come out because it had witnessed what the government had done in the past few months since Imran’s ouster. “The nation will come out on its right for peaceful protest and the sea of people will tell Pakistan was not made for a small group of thieves to come and decide its affairs.”

Imran said he would give the next plan of action for the party’s long march on Nov 26, adding that his movement for “real freedom” would not stop even with new elections. Meanwhile, talking to journalists at his residence in Lahore’s Zaman Park, the PTI chief said that the army chief’s appointment should be on merit. “How can a criminal sitting in London appoint an army chief… the purpose of appointing an army chief of choice is only to harm the PT,” he said.