Sajal on where she wants to make a home 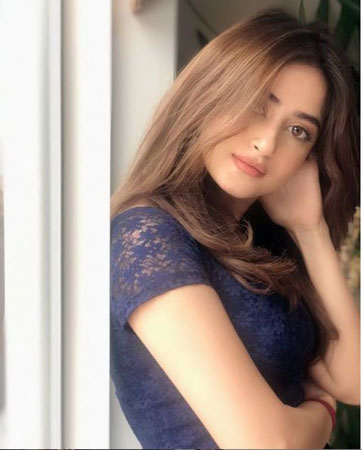 Sajal Aly was seen in the Bollywood film Mom alongside Sridevi. At a recent event, the Pakistani actor had a wholesome exchange with Janhvi Kapoor, daughter of the late Sridevi. They hugged each other and spoke about one another in their speeches as they both won their respective awards. At the event, which took place in Dubai on Saturday, Sajal was also asked about any place in the world she could ‘make a home in’. Responding to which she said, “India mein kyun nahi ho sakta?”

At Filmfare Middle East Achievers Night, Sajal Aly said when asked if she could make a home in any place in the world (outside Pakistan), where would it be: “India mein kyun nahi ho sakta? Bharat mein bhi ho sakta hai… and Dubai as well… ye aisa ek event hai jahan pe hume mauka milta hai ki harame jo Bharat mein log hai… Janhvi is here, Govinda Sir, Ranveer… at an event (Filmfare Middle East Achievers Night) like this it is a great opportunity for us to mingle with people jo mulk se door hain lekin dil se bahut kareeb hain (Why can’t it be in India. It can be in India… an event like this gives us an opportunity to meet our counterparts from Bollywood… like Janhvi Kapoor, Govinda Sir, Ranveer Singh… we are far because of our countries, but our hearts are very close).”

One of the highlights of the event was the tribute Pakistani actor Fahad Mustafa paid to Govinda. After winning an award, in his acceptance speech Fahad had credited the Bollywood actor for inspiring him to start acting in the first place. He also rushed from the stage to touch Govinda’s feet and got a hug in return before the actor shook Fahad’s hand.