Aisha Khan gives a glimpse of her son 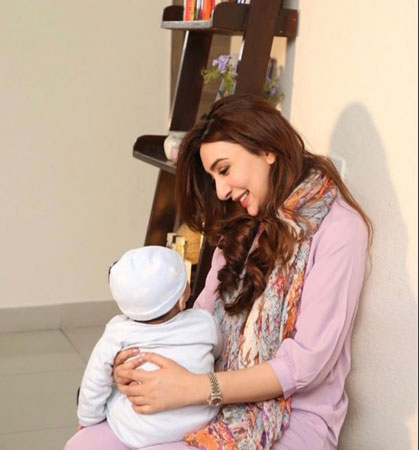 Former film and TV actor, Aisha Khan shared a glimpse of her youngest son as she marked his half-birthday. ‘Meri Nanhi Pari’ actor took to her Instagram handle on Sunday midnight to share an adorable glimpse of her younger son as he turned six months old. “6 months today!” she wrote in the caption of the picture with her baby boy sitting in her lap, while she adored him with a wide smile on her face.

She also added hashtags like ‘my youngest’, ‘the sweetest’, ‘my son shine’ and others in her post.

The post on the social platform was showered with love from showbiz celebrities as well as millions of her followers alike. Actors like Maya Ali, Ayeza Khan, and Uzma Khan among others were also spotted in
the comments section as they extended heartfelt wishes for the mother-son duo.

It is pertinent to mention that Aisha Khan announced the birth of her second child with her husband Uqbah Malik in May this year. On the photo and video sharing application, the former actor shared a graphic image which read: “Delighted to announce the arrival of our baby boy! 20.5.22.”

She captioned the social media post with “Alhamdulillah” and a heart emoji.

Aisha Khan tied the knot to Major Uqbah in an intimate ceremony in April 2018, and the couple welcomed their first baby girl, Mahnoor in November 2019.

The A-list actor had bid farewell to the entertainment industry before getting married, in order to move towards the ‘next phase of life’.