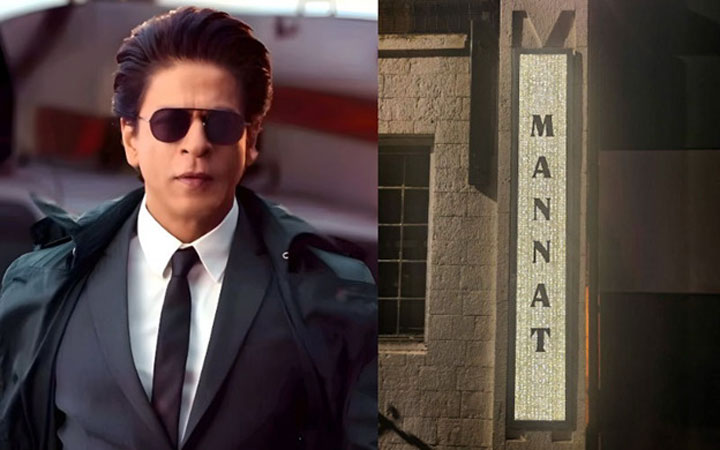 Shah Rukh Khan’s palatial residence in Mumbai has remained one of the most popular spots in Mumbai. The megastar owns a massive sea-facing bungalow in the prime location of the city’s suburbs and recently the superstar seems to have pepped up its entrance. The beautiful residence of SRK now has new nameplates on either side of the main gate. But that is not all! These plates are diamond studded.

A recent video, as well as a set of photos of the new nameplates, were posted on social media by one of the superstar’s fan pages which showcases that Mannat has received new diamond-studded nameplates. While on one side, the name of the palatial residence is written, on the other, is the iconic area name – Lands End. SRK’s Mannat is located in the prime area that is referred to as Lands-End since it is surrounded by the Arabian Sea. Fans who came across this post couldn’t control their excitement over this new addition and spoke about it in the comment section. While one of the fans commented saying, “Diamond star with Diamond nameplate”, yet another one expressed, “Beyond love”. Many of them also showcased their love by dropping emojis on the post. On the work front, Shah Rukh Khan will next be seen in Pathaan.

The action entertainer, which features the megastar in the role of a spy, marks his comeback on the big screen after four years. The film will also star Deepika Padukone as his leading lady along with John Abraham as the antagonist. Besides this, SRK also shot for Dunki which marks his first collaboration with Rajkumar Hirani and Taapsee Pannu. The actor will also be seen in the Pan India film Jawan, directed by South filmmaker Atlee and it marks the Bollywood debut of lady superstar Nayanthara and popular star Vijay Sethupathi.