Noir’ — a visceral tale of pain, heartbreak and revenge 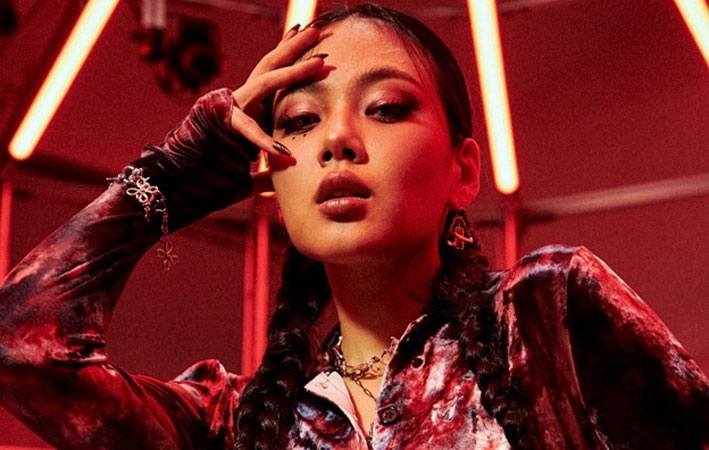 Few in K-pop can tell stories in as compelling a manner as BIBI does. She laces her lyrics with passion, aiming for stories as unique as they are universal. Her 2021 album ‘Life Is A Bi…’ – on which she chronicles an abusive relationship – is a prime example. “Oh my god, bish, you black and blue / Who did this to you?” the EP opens, a question she brushes off by answering: “Umm… life.” Even when she gets the courage to leave her abuser, she comes crawling back on ‘PIRI The Dog’, desperate for attention and love despite knowing how unhealthy the dynamic is.

A year later, on her debut studio album ‘Lowlife Princess: Noir’, it seems that girl is a distant memory… or is she? Abandonment, heartbreak, and loneliness drive the twisted ambition of Oh Geum-ji – the album’s titular character, inspired by Park Chan-wook’s Lee Geum-ja in Lady Vengeance – against the dystopian backdrop of the year 2044. As pollution and scarcity ravage Seoul and people fight for control of an underground society à la Sin City, Oh Geum-ji rises from the depths of despair to become the queen of this lawless land. Her rise to the top is mirrored in the arrangement of the songs on the album, going from tracks where she reckons with her vulnerabilities and loneliness towards songs that showcase a woman more ruthless, agile, deadly, and arrogant.

Despite the growing sense of urgency as we climb, BIBI remains in full control of the narrative, which is easily the best part of this record. Even on short tracks, she doesn’t cram the empty spaces with words, but lets bitterness seethe. In ‘Blade’, she introspects over a slow, heavy build-up before launching into high-pitched crooning over with menacing, futuristic beats.

When the simmering anger merges with BIBI’s signature nasally vocal style, the songs quickly become explosive. As she thinks about the fatal game she’s playing on ‘Motospeed 24’, her soft, saccharine tones turn sinister. Later on ‘BIBI Vengeance’, an eerie, distorted flute quickly segues into booming Latin-inspired beats, layered with cries of “nappeun nyeon” (literally ‘bitch’) delivered with cool-girl disinterest. And when BIBI ventures into campy theatricality that the full effect hits like a bullet train. She sends heads rolling in the blood-soaked video for ‘Animal Farm’, her crooning putting us all on edge: “Where is love? Where is my sympathy? What have we lost?”

Deadlier than the constant threat of implosion and self-destruction is the way BIBI weaponises her voice and tests its limits. She leans on her lower register on ‘Lowlife Princess,’ taking us on a roller-coaster ride of languid spoken-rap, intermittent moaning, and frenzied screaming. Exaggerated huffing and puffing brings personality to ‘Witch Hunt’, and for the dark pop sound of ‘JOTTO’, she wields her voice as she would a yo-yo, letting high notes run amok before reeling them back into mumbles.

On the pop-punk ‘City Love’, – the last song, where the pain is still fresh – she belts pitiful cries of “Please love me, give me a kiss, touch me.” One can easily imagine this song soundtracking the story of a young small-town girl whose naive dreams about the big city are quickly dashed. On ‘Sweet Sorrow of Mother’, over a poignant, piano-led showtune arrangement, BIBI grapples with her consuming loneliness and anguish. It harks back to the pain of ‘PIRI The Dog’, except the grovelling is replaced by an exhausted resignation. “Even if you cut out a piece of me and fill your stomach, I’m willing to give (it) to you without hesitation,” she promises, revealing an uncharacteristic chink in her steely armour.

These snapshots of vulnerability make Oh Geum-ji a delightfully complex character. Even while on a rampage for power, she is always aware of the spectre of terror that hovers over her – a constant reminder of how she was forced to survive in a ruthless world. She keeps it at arm’s length on ‘Loveholic’s Hangover’, where she duets with Sam Kim over haunting beats that betray her exhaustion – one last hurrah before she might decide to give up.

She finally confronts that persistent shadow on ‘Wet Nightmare’ over a slow, tense R&B arrangement. “Baby, tell me why you keep showing up in my dreams?'” she asks.

Though few and far between, these moments of weakness are clearly intentional – a testament to BIBI’s exceptional storytelling – bookended as they are by robust strong tracks that are quick to reiterate her strength and purpose.

The contrast they provide not only creates a frame of comparison between the past and the present – her journey from an abandoned child to a powerful figure – but also leaves us with a promising open-ended question: ‘BIBI Vengeance’ may now be sitting at the top of the food chain, but is it only a matter of time when the past comes to haunt her again?