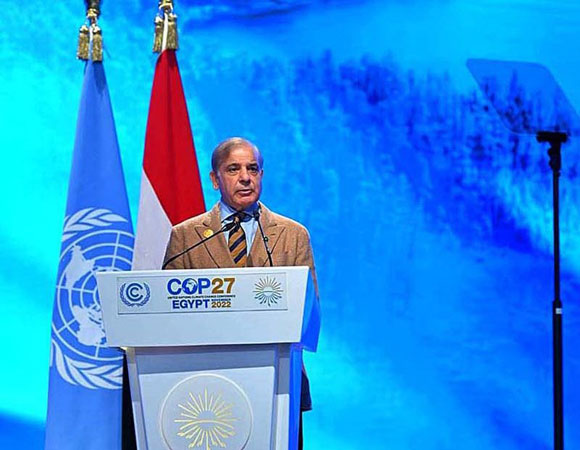 A historic United Nations deal struck on funding to help vulnerable countries cope with the effects of climate change is a “pivotal step” towards justice, Pakistan Prime Minister Shehbaz Sharif said Sunday. The UN COP27 summit wrapped up Sunday in Egypt with a deal for a fund to help vulnerable countries cope with “loss and damage” from devastating climate impacts. “The establishment of loss & damage fund at the UN climate summit is the first pivotal step towards the goal of climate justice,” Shehbaz tweeted. “It is up to the transitional committee to build on the historic development. I appreciate (Minister for Climate Change) Sherry Rehman and her team for their contribution and hard work,” the prime minister remarked. The prime minister along with his cabinet members including Foreign Minister Bilawal Bhutto Zardari and Climate Change Minister Senator Sherry Rehman had raised the voice for climate justice at the regional and global levels. The Fund would lead to the provision of assistance to the countries impacted by climate change. It will also support Pakistan in the rehabilitation of the flood-affected people and the reconstruction of the damaged infrastructure.

According to a PM Office statement, COP27 made history by taking a practical step comparing the Paris Accord and Green Marshal Plan. The COP27 summit was recently held on November 7-8 also participated by the prime minister at the invitation of the Egyptian president. He had also co-chaired a roundtable conference on “loss and damage” and his address to the session also mainly focused on climate change-induced disaster and the measures to mitigate the losses.

The prime minister emphasized the establishment of the Loss and Damage Fund to provide climate justice to the affected countries. Following the agreement on the establishment of the Fund, Sherry Rehman said, “It has been a long 30-year journey from demand to the formation of the Loss & Damage Fund for 134 countries” and called it an important first step in reaffirming the core principles of climate justice.

“This is not about accepting charity,” she said. “This is a down payment on investment in our futures, and in climate justice,” she remarked. The United Nations Secretary-General Antonio Guterres also welcomed the decision and said, “Clearly, this will not be enough, but it is a much-needed political signal to rebuild broken trust.”