Seven injured near Kurram border following firing from Afghan side 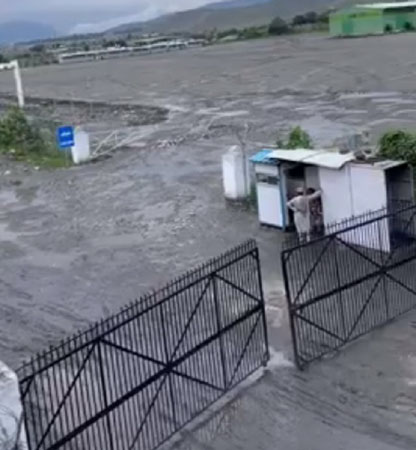 Seven people, including two children, were injured following firing from across the Afghan border in Kharlachi and Borki near Kurram border on Sunday, media reports said.

Parachinar District Headquarters Hospital (DHQ) Deputy Medical Superintendent Dr Qaiser Abbas Bangash said the children were seriously injured while several livestock were also killed due to shelling from Afghanistan on the local community. He said the injured, which also include three security officials, were under treatment at the hospital.

Federal Minister for Overseas Pakistanis and Human Resource Development Sajid Hussain Turi, while confirming the incident, condemned the firing. In a statement shared on Twitter, he said: “Afghanistan’s violation of Pakistan’s Kurram border at Kharlachi and Borki and targeting the civilian population is condemnable.” He called for an immediate ceasefire and said the people of Kurram and the Pakistan Army knew well how to “protect their land and befittingly respond to any aggression”. Turi stressed that aggression and war were not a solution to any problem, adding that Pakistan wanted to solve all problems with Afghanistan and other neighbouring countries through dialogue.

The federal minister also stated that Afghanistan was a brotherly country and Pakistan wanted all “outstanding issues to be resolved through diplomatic channels and dialogue”. Turi said that land disputes between the people living on both sides of the border should be resolved through bilateral jirga and diplomatic channels so that no such incident takes place in the future as it will damage the fraternal and friendly relations between the two countries. “He said that we have already held jirgas and negotiations with the Afghan government on the land dispute and more negotiations are needed, and the people across the border should not try to unsuccessfully occupy the Pakistani lands of Kharlachi and Borki,” the statement shared on Twitter reads.

He said that Pakistani forces had conducted retaliatory firing after the Afghan side’s targeting of the local populace.

The military and the Foreign Office have not made a comment on the situation yet.

Meanwhile, local tribal leader Inayat Turi said clashes first took place on Saturday between local tribes and the Taliban on the Pak-Afghan Borki-Kharlachi border over illegal constructions by Afghanistan. He said a ceasefire was reached with the cooperation of local leaders, Afghan officials, and Pakistan Army officials. However, he added that clashes took place again today after the Afghan side resumed work with a pair of excavators at the same place.

The tribal leader said that there was anger and unrest among the local population, who were now demanding immediate measures by the officials to respond to Afghan attackers since the incident was direct aggression against Pakistan’s integrity. He said that shelling from the Afghan side on locals was still ongoing and people were expressing concerns about the risks of injuries to innocents. The development comes amid already tense relations between the two neighbours.

Earlier this week, the border at Chaman was closed for an indefinite period after an armed suspect from the Afg­han side opened fire on Pak­is­tani security personnel at Friendship Gate last week, resulting in the martyrdom of one soldier and injuries to two. A subsequent flag meeting at Friendship Gate between officials from both sides failed to evolve a consensus over the reopening of the crossing.