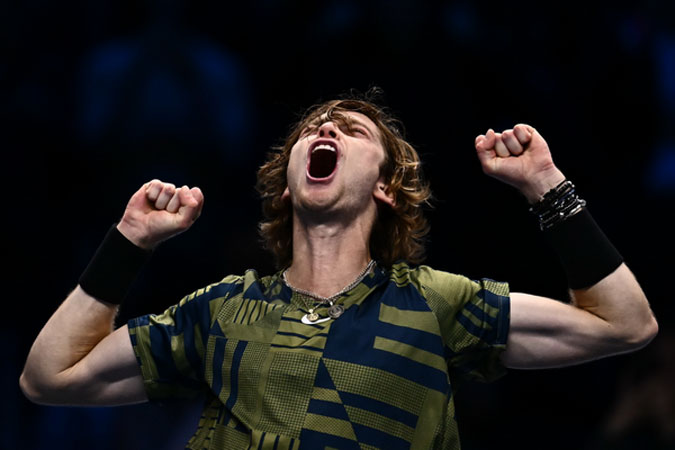 TURIN: Andrey Rublev sealed a place in the final four of the Turin ATP Finals on Friday rallying from a set down to beat Stefanos Tsitsipas 3-6, 6-3, 6-2. Rublev’s win saw him overtake Tsitsipas in the Red Group to take second place behind Novak Djokovic. With the group stage now over Djokovic faces the American Taylor Fritz with Norway’s Green Group winner Casper Ruud awaiting Rublev in Saturday’s semis. In a winner-takes-all encounter with the last place in the semi-finals at stake Tsitsipas looked set to win a third head-to-head with Rublev this season with a powerful first set. But the world ranked number seven Rublev showed no nerves in the big moments thereafter and overpowered the Greek with the quality of his ground strokes, earning his first ATP finals semi-final encounter. “I didn’t give up. I kept fighting and playing,” Rublev said. “I just gave my best and I managed to turn the match around and I am happy to be in the semis.” Djokovic marked himself out as the favourite when he remained unbeaten earlier Friday producing a battling 6-3, 6-7 (5/7) 7-6 (7/2) win over Daniil Medvedev. The 21-time Grand Slam winner Djokovic had gone into the dead rubber already assured of his place in the semis after wins over both Rublev and Tsitsipas.