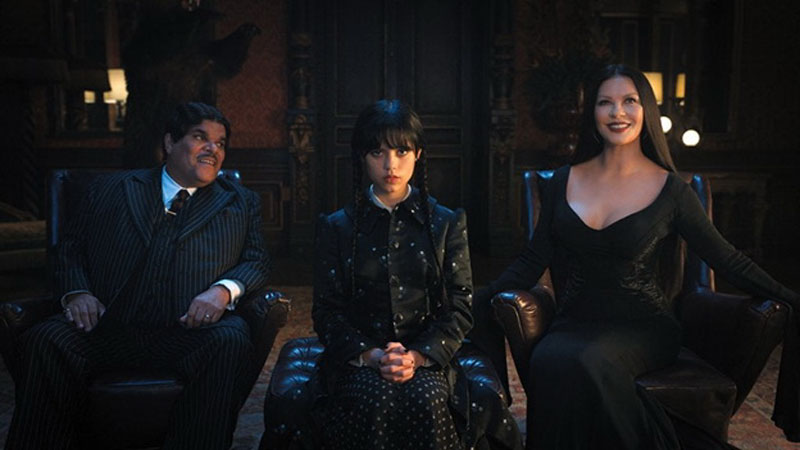 Stepping into a role played indelibly by Christina Ricci in a pair of ’90s features (and, memorably, by Lisa Loring in the classic TV series), Jenna Ortega has no trouble making the eponymous character in Netflix’s Wednesday her own. Ortega’s Wednesday Addams is the perfectly creepy and kooky accumulation of eight episodes of deadpan line readings, precise comic physicality and expressive eye-rolls. The character has never needed to face the project-carrying focus of this iteration, but thanks to Ortega’s wildly entertaining blur of arch broadness and subtlety, plus creators Alfred Gough and Miles Millar’s refusal to over-explain or over-evolve the eternally nihilistic Goth favorite, Wednesday gets to come into her own here. Though the overall series is rarely quite at its leading lady’s level – adjust your expectations for more of an above-average CW dramedy – there are enough promising elements that I hope Wednesday gets the opportunity to make a second season with some refinements.

The series begins with Wednesday as a public school outcast who learns her brother Pugsley (Isaac Ordonez) is being bullied and responds with an elaborate and potentially deadly prank against the water polo team.

In no time, Wednesday has been shipped to Nevermore Academy, a rural Vermont school for the unusually gifted – that would be vampires, werewolves, sirens and the like, not math nerds or theater kids. Wednesday, who has begun to have visions that she can’t interpret or control, isn’t enthusiastic about being among alleged peers, but parents Gomez (Luis Guzmán) and Morticia (Catherine Zeta-Jones) are overjoyed to have their daughter going to their beloved alma mater. They hope that Nevermore will be as good for Wednesday as it was for them. This optimism doesn’t stop them from sending disembodied hand Thing (Victor Dorobantu) as a spy.

Note that Gomez and Morticia – with Zeta-Jones and Gomez giving the original animated incarnations a surplus of PG-level horniness – are barely supporting figures here, popping up in the premiere and a midseason episode. Wednesday’s jovially sadistic Uncle Fester (a properly deranged Fred Armisen) appears in one episode. Lurch (George Burcea) is hardly featured. This is not The Addams Family. This is all Wednesday, though as a supporting character, Thing is very handy (sincere apologies).

At Nevermore, Wednesday gets warned about her behavior by headmistress Larissa Weems (Gwendoline Christie), Morticia’s former classmate (do not attempt the math), and is quickly required to get counseling from an irrepressibly peppy shrink (Riki Lindhome) in the nearby town. Wednesday isn’t pleased with that prospect – nor is she eager to befriend her bubbly new roommate Enid (Emma Myers), brooding school hunk Xavier (Percy Hynes White) or overwhelmingly normal townie Tyler (Hunter Doohan), who happens to be the son of the town sheriff (Jamie McShane), one of many authority figures who isn’t an instant Wednesday Addams fan.

Smallville creators Gough and Millar – the show comes by its CW vibes honestly – have given Wednesday a very sturdy structure devoted much more to a serialized season-long arc than anything episodic. Wednesday arrives at Nevermore at the same time as a huge, bug-eyed, long-limbed, fanged monster, a creature with ties to a multigenerational family mystery and possibly to a Wednesday-related doomsday prophecy. There are town-and-gown tensions with the local community, stoked by the disapproving sheriff (McShane) and the ambitious mayor (Tommie Earl Jenkins).

There’s a lot happening in Wednesday and the general mysteries are executed in a way that keeps the series charging along, but at some point nobody asked what feels like a big question: Is a Wednesday Addams series one that you want to have “charging along” toward various prophecies, apocalypses and ever-more-threatening Big Bads? Or do you really just want to watch Wednesday be unrelentingly sarcastic and meting out scorn indiscriminately?

The first season builds to a climax featuring various CG creatures fighting with limited visibility in a dark forest and Wednesday reduced to the capacity of any Buffy-lite heroine. It’s a bit exciting and proves you absolutely can build a Wednesday Addams series at a school for supernaturally enhanced teens and the result will be interchangeable with Legacies or Chilling Adventures of Sabrina or your chosen descendant of Hogwarts or Xavier’s School for Gifted Youngsters. But why would you?

Wednesday needs more episodic episodes because the parts of the series that work best are the ones in which Wednesday treats vaguely normal high-school things – even those heightened for Nevermore – as objects of her contempt, but participates anyway. There’s a competition between different school houses that keeps raising the stakes in fun ways. It’s a good episode.

The kids have to go do community service at a theme park set in the town’s witch-trials past that, naturally, raises Wednesday’s ire. That’s a good episode. There’s a school dance that Wednesday finds herself roped into attending. It’s a good episode and, with in-character dancing, delivers Ortega’s series-best moment. That stuff is almost all in the first half of the season, while the second half is mostly mythology and, in the process, lets most of the show’s character development slip in the name of plot.

The series could benefit from being more episodic and it could benefit from being simply funnier. Gough, Millar and most of the writing staff hail from drama backgrounds, and even the best of Wednesday’s withering, fatalistic put-downs have the feeling of first-draft punchlines. Part of why 1993’s Addams Family Values has largely usurped the 1991 original film in people’s affections is that the script by Paul Rudnick is basically one one-liner after another, even if I remember nothing at all about the plot.

This isn’t to say that the second season of Wednesday needs to go full Borscht Belt, but after Gough and Millar have done their thing, maybe somebody like Chris Kelly and Sarah Schneider (The Other Two) should be brought in just for a punch-up draft? Or maybe like Gloria Calderón Kellett (One Day at a Time)? Because as enticing as the idea of Wednesday tapping into her Latina roots happens to be, the reality here is token references and unrealized potential.

Speaking of unrealized, or at least under-realized potential, the lure of Tim Burton, director of the first half of the season, should be tempered a little. There are delightfully weird beats here and there in the early episodes, but whether because of budgetary or scheduling challenges, the show becomes less distinctive and more generically dark as it goes along – so much so that most viewers won’t notice when Burton passes the baton to Gandja Monteiro and James Marshall for the last four episodes. The production design in and around Nevermore is solid, with occasional playful homages to cartoonist Charles Addams, but these two ridiculous statements came to my mind multiple times: “Chilling Adventures of Sabrina looked like it cost more” and, “When it comes to Tim Burton stories about special kids at special schools, Miss Peregrine’s Home for Peculiar Children was a much more Burtonian production.”

With so much happening, it’s left to the cast to hold things together. Providing an amusingly sunny foil to Ortega’s dark excellence is Myers, as the two actresses cement Wednesday as a story of female friendship, generating a sweet rapport that thankfully doesn’t require any “taming” of Wednesday. The series doesn’t overplay its love triangle, but Doohan and Hynes White are refreshingly “normal” and likable as the male leads. Christie has that Elizabeth-Debicki-in-The-Crown quality where you frequently sense that her presence opposite diminutive co-stars – Ortega and Ricci, as Nevermore’s first “normie” faculty member, in particular – is intended just as a sight gag, but there’s a pain in Weems’ past that Christie keeps underlining nicely. A second season may allow for other Nevermore students – starting with Joy Sunday and Georgie Farmer – to get real personalities.

Or maybe the second season would just offer more Ortega, whose steady ascension from Young Jane on Jane the Virgin to You to features including Scream and X have given the impression she was ready for a full-on starring vehicle. She’s special in Wednesday and if the show falls short of her standard, it has room to grow.