PTI gets conditional permission for rally 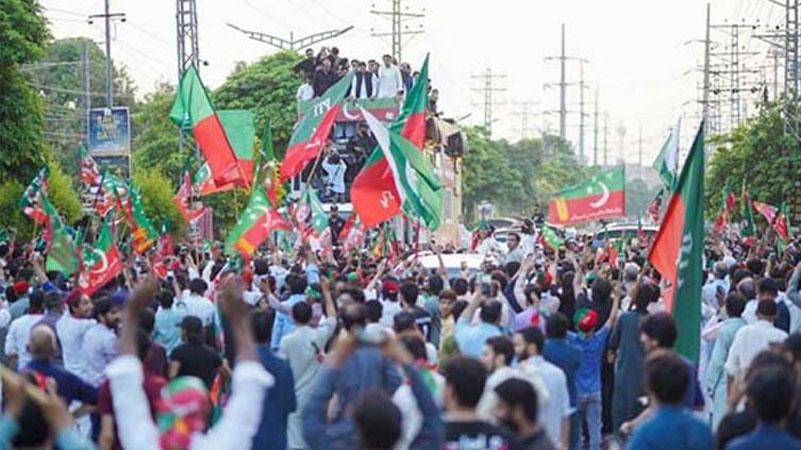 District administration Islamabad has conditionally allowed the PTI rally to move towards Rawat from Koral Chowk and asked the organisers to ensure participants remain peaceful during the movement, Islamabad police said.

In a tweet, the capital police said section 144 will remain in place in areas other than the route permitted for the march. Under the conditions, participants won’t be allowed to block any road, vandalise public property, or raise anti-state slogans. Police warned of action if any of the rally participants were spotted carrying arms or violating the prescribed code. A traffic plan would be also issued to ensure smooth flow of traffic. It is to mention that PTI has been granted NOC by the Islamabad administration to hold a rally in the Capital but on 35 conditions. PTI has been given the permission to hold peaceful rally on the application of party leader Ali Nawaz Awan. A deal between PTI and Islamabad administration was made in which 35 conditions were made. Islamabad Deputy Commissioner issued the NOC to PTI for holding a rally from Koral Chowk to Chak Beili Rawat. The Islamabad DC cautioned the PTI that their rally is not allowed to alter the route fixed already. Any deviation from the rally route will ultimately lead to cancellation of the NOC, the DC added. The Islamabad police has issued a security alert for the city’s entry and exit points after PTI chief Imran Khan announced the date when his long march would reach Rawalpindi.

The police said that officers equipped with body cameras would be stationed at the entry and exit points. “The recording of body cameras can identify the elements involved in illegal activities. Body cameras will be used for the first time in Islamabad during the public order situation,” the police said. It added that Rangers and Frontier Constabulary personnel would also perform their duties while equipped with modern technology.