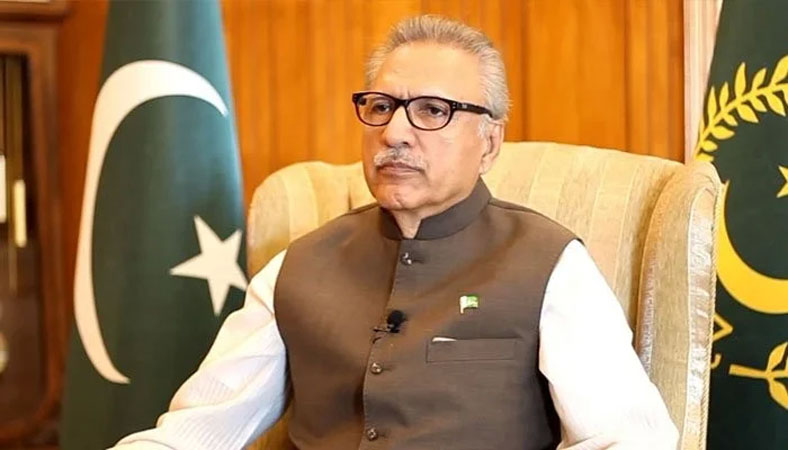 President Arif Alvi has said that he will follow through on Prime Minister Shehbaz Sharif’s advice regarding the appointment of the next army chief, a private TV channel reported on Friday. In a conversation with his aides about the appointment of the new chief of army staff (COAS), the president said that he could not create hurdles in the much-anticipated process. “I do not have the legal authority to stop the prime minister’s advice; I have never interfered in the affairs of the state,” President Alvi reportedly stressed. In response, PTI Vice President Fawad Chaudhry said that the president would fulfil his constitutional duty when it comes to the crucial appointment.

“Let me make it clear, whatever the president decides, it will have Imran Khan’s complete support,” he added. The statement comes after PTI Chairman Imran Khan – who has time and again called for the appointment of the army chief on “merit” – said that his party will be sitting back and watching, as the government decides to appoint the next army chief. The incumbent army chief, General Qamar Javed Bajwa, is set to retire later this month and he has ruled out an extension in his tenure – and so has the military. Before consulting the ruling partners, PM Shehbaz approached his brother, PML-N supremo Nawaz Sharif regarding the decision. In a meeting in London, both the leaders agreed to appoint the military’s senior-most officer as the next army chief. As he touched down in Pakistan after his London visit last week, the prime minister fell sick, but he has started consultations with the Pakistan Democratic Movement (PDM) leaders for the coveted slot.

The allied parties have fully mandated the premier for making the appointment as per set procedures and traditions. PDM chief Maulana Fazlur Rehman telephoned the prime minister to inquire about his health. During the telephone conversation, the two leaders exchanged views on the situation in the country and the appointment of the new army chief. Fazl reportedly threw his weight behind PM Shehbaz, saying he should appoint the new army chief as per the set procedure. They said a majority of the ruling coalition leaders termed the army chief’s appointment an administrative and discretionary power of the prime minister. PPP and JUI-F leadership fully authorised PM Shehbaz Sharif to appoint the new army chief as per his wishes.