‘Sevak: The Confessions’ all set to shake audiences 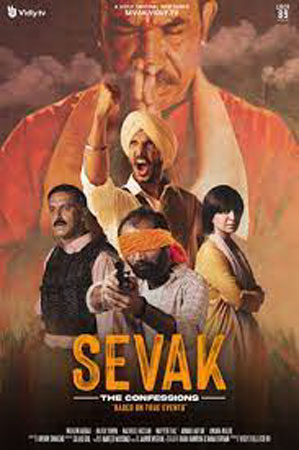 Over The Top (OTT) platform Vidly.tv on Friday releases the trailer for ‘Sevak: The Confessions’, an original action thriller web series based on true stories, which is all-set to enthrall its audiences from November 26. Vidly.tv hails this series as a story of intrigue and nail-biting suspense that is inspired by true events. The recently released teaser of this series already has shaken its audiences with a big bang. The star cast of this series include Mohsin Abbas, Hajra Yamin, Nazarul Hassan, Nayyer Ejaz, Adnan Jaffar and many others. The series is brought to life by the amazing duo of the legendary writer Saji Gul and the renowned director Anjum Shahzad.

The phone rings and gunshots pick up. From the opening scene this eloquently stylized espionage thriller draws on a strong plot and uber talent of the cast to deliver an elevated historical action series, never seen before.

It builds on the philosophy that when a hero is born his “rakshas” (demon) is born on the same day. The trailer hints on stories about family loyalties, deceit, terror, and crime. There is hatred, there is anger, there is action, there is romance. The series explores and reveals the true antagonists behind the events of a revolution that leaves the audience with an urge to know the full story.

Three tracks and eight stories intertwined with scintillating murder, mystery and espionage, Sevak is based on a keenly woven tale of terror and deceit, which intends to thrill its viewers with action and suspense in a time travel set within the backdrop of true events between 1984 and 2022.

This historical action thriller revolves around a true story of an assassin that follows the journey of Vidya, a journalist, in a quest to find out the truth behind the film star Jeet Singh’s death. She is aided by Mannu, a key informant.

Mannu, leads Vidya on a path to reveal the dark secrets of Jeet’s death. Vidya unwillingly enters the labyrinth of Mannu’s tales encountering many ghosts of his past. The stories shared by Mannu unravel the horrors of hate crime, atrocities and genocide. As the truth is revealed, both of them find themselves in danger for their lives. Sevak enters the realm of a biopic action thriller with screen-stealing performances from its main ensemble, which will keep the viewers hooked all the way. The series takes a bold visual approach, building an overbearingly eerie tone as the fates of several characters hang in the balance.

In the midst of all the action, thrill, suspense, mystery and espionage, this series showcases a melodious and romantic love affair of the two protagonists that is nonetheless parallel to a roller-coaster ride. The director has articulately used the flair of Nayyer Ejaz, the most versatile artist, in a style that is expected to gain attention by a storm. Sometimes, to see the truth, you need to walk the path of darkness.