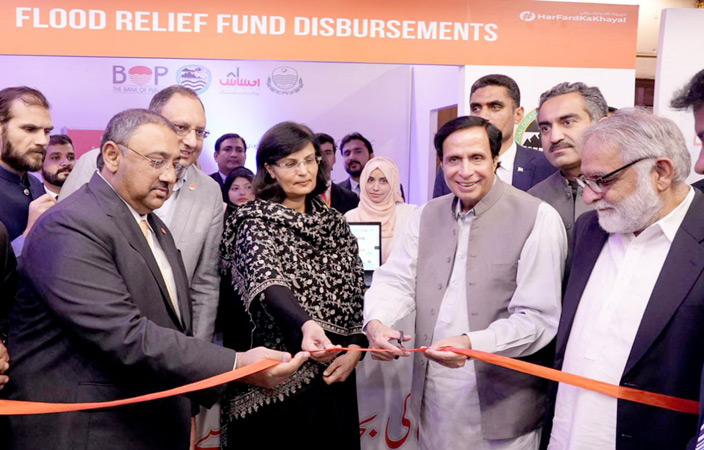 CM Parvez Elahi added that a total of 12.20 billion in aid is being given to 55,400 flood victims. The government is giving 2.8 lakh rupees each to the owners of 47,500 mud houses and 4 lakh rupees each to the owners of 8 thousand concrete houses. Valuable work has been done by armed forces, Akhuwat and religious NGOs for the victims, he noted. I went to different areas of DG Khan to assess the situation; he said and added that thousands of people’s houses, mosques and schools were washed away. He also commended the efforts of officers who lend a helping hand and noted that Sania Nishtar developed a wonderful distribution system in two months. The transparency of the aid program is unprecedented as the record is available on the PDMA system. Meanwhile, World Bank, Asian Development Bank and ambassadors have also praised the aid program.

The CM said that the Ehsaas program is Imran Khan’s plant which is going to become a tree. The work of helping the helpless brings blessings in other works; he added and stated that work equal to one year has been done in three months which would benefit the common man. He said that children were given free education and books before and now they are benefiting from free education till graduation. Three times more stipends would be given than before to the girl students of south Punjab. Imran Khan and I did a telethon together and we got ideal funds, he added. No other person tried to do so as they knew that the public would not give them anything. Imran Khan has a cheque of one billion rupees for Sindh but they have not conducted the survey yet. It could be syphoned off if the aid money is given to Sindh. Don’t know how many days are in power but would continue to serve the people. Allah rewards good intentions. Every day I review what I have done for the people. I try to do the remaining work the next day, he concluded.

Dr Sania Nishtar said that preventing corruption in the Ehsaas program was the biggest challenge. In the past, social protection data was compiled on a political basis. The curse of nepotism and political bias has been eliminated in data entry. The record of every payment will be recorded through CCTV.

A delegation led by managing director Roche Pakistan Ltd Hafsa Shamsie met CM Parvez Elahi at his office and the CM was briefed that the rate of breast cancer is the highest in Pakistan as eight to 10 thousand women are found to be suffering from cancer.

The CM said that centers of excellence would be established in major hospitals along with special counters in government hospitals for the prevention, diagnosis and treatment of breast cancer. Cancer may be diagnosed at any stage but the patient would be treated free of charge; he said and announced that lung cancer patients would also be provided with the best treatment facilities.

The CM said that 37 thousand lady health workers are being trained in collaboration with the private sector as LHVs could best work for the diagnosis of cancer in women. He asked Roche company to set up a production plant in the 10-year tax-free zone of Quaid-e-Azam Business Park and the government would extend every possible support.

Hafsa Shamsie noted that a positive change is being witnessed in the healthcare system of Punjab. Parvez Elahi’s commitment to providing the best medical facilities to the people is commendable, she added.