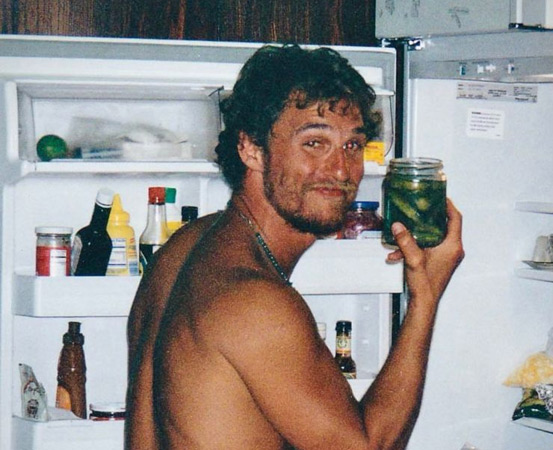 Alongside the Nov. 14 photo-in which his back to the camera-shared to Instagram, the Gentlemen actor simply wrote that he was “pickled.” And judging by fans’ reaction to his photo almost baring all, there’s no doubt that they were as well. Noting the placement of the other condiments the actor stood in front of, one user commented, “To be that soy sauce.” Added another, “If I didn’t like pickles before, then I definitely do now.” However, a few were able to see past the commotion and observe the shelves themselves instead, with a third adding, “I think I love this more because his fridge looks just like an average person’s fridge.” It’s worth noting that this isn’t the only time that McConaughey has stripped down in front of the camera. Just two years ago, the actor bared all for his role in the thriller Serenity. In fact, during a 2019 interview with Stephen Colbert, after the late-night host revealed that the actor was “buck naked” in the film, McConaughey had a cheeky response about his role. “That’s what I keep hearing,” McConaughey joked. “I gotta see if there’s a new edit or a new cut of this film that I haven’t seen.” Added the actor, “I know there was topless. And I’ve even got people coming up going, ‘Oh my God, it’s a great scene, full frontal.’ And I’m like, ‘What? Was it really? Was I?” But despite his latest photo being a throwback, something tells us that this particular instance will be a big dill for quite a while.