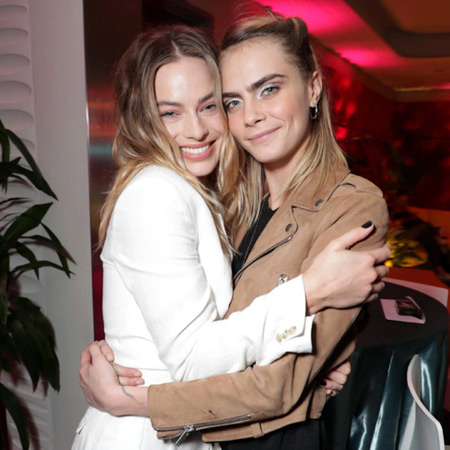 Margot Robbie is speaking out over those viral crying photos. Two months after paparazzi photographed her seemingly upset and appearing to sob outside pal Cara Delevingne’s house, the actress is clarifying that she was “not crying” in the pics, sharing that they were simply snapped at an awkward moment.

“I had something in my eye,” she explained in the December/January cover story of Vanity Fair, published Nov. 14. “I’m trying to grab my face mask, trying to hold a coffee cup and I couldn’t get a hair outta my eye.”

Margot admitted that after the photos went viral-and raised concerned about the status of her friendship with the supermodel-even her mother called to ask whether the BFFs were alright, which she replied, “Yes and yes.”

The Barbie star also noted that the September photos of her weren’t even taken at the model’s house. Margo said she was “outside an Airbnb” that she was renting and “not at Cara’s house,” like the headlines implied.

After working in Hollywood for over a decade, Margot said she has unfortunately become used false media narratives and does her best to ignore them. “You want to correct it, but you just can’t,” she told the magazine. “You have to, I don’t know, look the other way.” Margot, 32, and Cara, 30, have been close since working together on Suicide Squad in 2016. That year, the Oscar nominee gushed about their friendship, calling the Carnival Row star a “rare gem.”

“I’ve just never met anyone like her,” Margot told U.K. news site Femalefirst. “She is the most genuine person you can ever meet and there’s nothing calculated about that girl,” she said. “She’s like a little comet just blasting her way through this world. She added, “We have the most fun ever.”