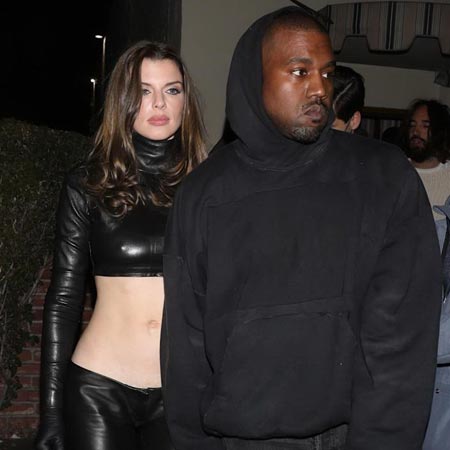 Julia Fox acknowledges that she is considering dating women.

Kanye West’s ex-girlfriend revealed in a recent interview with Ziwe that she is aware of her “gay bone.”

She began: “I, like, have been thinking about it a lot recently. Because I do think I have, you know, a gay bone and I need to explore that a little bit more.”

The Uncut Gems star continued: “Maybe my ex-boyfriends weren’t wrong when they were calling me a lesbian and complaining that I never wanted to have sex with them.”

Fox went on to note that one “can find love in all places and all races.”

The Italian-American actress shared that the rapper had a lot of “unresolved issues” which is why she split from Ye after a two-month romance.

“The unresolved issues that he was dealing with… It just seems like he had a lot to work on, and I just don’t have time for it, or energy. I don’t have the bandwidth or emotional capacity for it. I’m proud of myself for that,” the 32-year-old said about Kanye, 45.

Julia Fox feels ‘proud’ for breaking up with Kanye West

In another interview with The New York Times published in March, Fox suggested that their busy schedules played a factor in their breakup. Fox said, “I tried my best to make it work. I already had a jam-packed life. How do I fit this really big personality into this already full life? It just wasn’t sustainable. I lost like 15 lbs. in that month.”

Fox also addressed claims that accused her for using the relationship for personal gain. She told that publication that it was actually Ye who approached her through a mutual friend.

“That’s such bulls. He got my number through a mutual friend, period.”

After agreeing that there was “a good amount” of what ES described as a “romantic spark” between the two, Fox said that she took the relationship “day by day” to see “where it went.”

Talking about the red flags she noticed, Fox elucidated that “real life set in and the lifestyle wasn’t sustainable. I couldn’t fly away once a week. And I tapped out at the first sign of a red flag.”

Moreover, Fox hinted that West’s very public divorce from ex-wife Kim Kardashian was also a cause for the split. However, the model and actor confessed that she was proud to have taken this step.

“I’m proud of myself for that,” Fox told to ES. “Pre-Valentino [her son with Peter Artemiev] Julia would have definitely stuck it out and been there for longer.”

Fox and West met in Miami on New Year’s Eve, and on Valentine’s Day, a rep for the mother of one confirmed to PEOPLE in a statement, “Julia and Kanye remain good friends and collaborators but they are no longer together.”