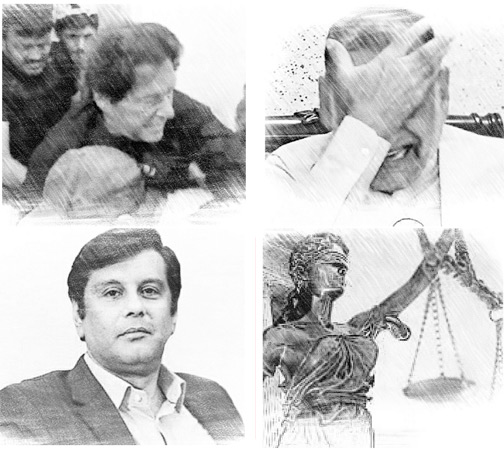 “CJP, we are looking towards you because we don’t have hope from anywhere else,” he said, adding that it was high time the courts became assertive and stood with the people of Pakistan.

Addressing the Haqeeqi Azadi marchers via video link, Khan reiterated that prosperity and economic stability are linked to the judicial system of our country. He stated that being a citizen of Pakistan it is his constitutional right to register an FIR. However, despite being the former prime minister of the country, his FIR after the attack on him wasn’t registered. The PTI chief further said the coalition government wants him to wait for general elections, “but I can’t wait because I worried about the economic situation of the country.” “I am sure that like landslide victory in by-elections PTI will clean sweep all other parties even if elections are held as per schedule but we can’t wait for a year because the country is in a crisis,” he added.

Imran Khan criticised the Election Commission of Pakistan (ECP) for repeatedly giving decisions against the party, claiming the body is on an “agenda”. He urged Chief Justice of Pakistan Umar Ata Bandial to hear the case filed against the Chief Election Commissioner Sikandar Sultan Raja. The former premier lamented that the election body only heard PTI’s foreign funding case and an investigation was conducted in a biased manner.

Imran Khan alleged that the ECP was working on an agenda against the PTI. “Not only is it close to the PML-N but also the handlers,” he said. “Chief Election Commissioner Sikandar Sultan Raja passed decisions against us eight times and all of them were rejected by the judiciary.” Referring to the electoral watchdog’s verdicts against the party, he asked, “How could he pass judgments on us when he has been repeatedly giving decisions against us.”

Imran said that the election commissioner had trapped PTI in two cases – foreign funding and the Toshakhana reference. The PTI chief, while slamming the Election Commission of Pakistan’s verdicts in the two cases, said that he could “guarantee that it will be proven that I have not done anything unlawful”.

Imran alleged that those who had done illegal things were allowed to go scot-free.

He claimed that with the help of former prime minister Yousaf Raza Gillani, former president Asif Ali Zardari and former prime minister Nawaz Sharif took “four expensive cars” from the Toshakhana, which was illegal. Imran requested for his cases in the Supreme Court to be heard so that there can be “trust in the system of justice”.

Imran Khan asked how a convict could take important decisions for Pakistan, especially those that concerned the country’s security.

The PTI chief, once again, criticised the incumbent government and Prime Minister Shehbaz Sharif for consulting PML-N supremo Nawaz Sharif over the army chief’s appointment. Imran said that Nawaz was not capable of taking decisions on merit because “he always keeps his interests ahead of the country”. “And he doesn’t want elections because he knows I will win. He is a very big coward,” he added.

Imran Khan asked the “handlers” of the incumbent government “who was responsible for the economic crisis in Pakistan today”. The PTI chairman stated that six months back he had warned the “handlers” that the conspiracy to bring PML-N into power would cause losses. “Shehbaz won’t be affected if our national security is compromised […] he goes on private tours on the government’s money,” Imran claimed, expressing his fears of the country heading towards default. He added that if people thought the government could still solve the economic issue “then I want to put this question in front of you that who brought Pakistan to this stage in the first place”.

Imran Khan berated the coalition government for “murdering Pakistan’s economy” since PTI’s government was removed from power. “When the PTI govt was ousted in April, the risk of Pakistan taking loans from abroad was 5% today the risk has increased to 64.5%,” he highlighted.

Khan went on to say that this risk percentage shows that the world considers Pakistan’s economy “extremely weak.” “This shows that they believe Pakistan can’t return its loans,” he added.

“These two families [Sharif and Zardari] have increased our loans by four times […] if we default, the rupee will depreciate further because dollars won’t come in and people won’t invest,” the PTI chief said.