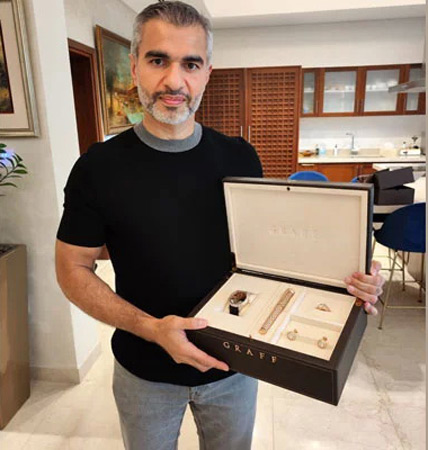 An expensive Graff wristwatch worth at least Rs2 billion, gifted by Saudi Crown Prince Mohammad bin Salman to former prime minister Imran Khan, was sold by Farah Gogi and Shahzad Akbar to Dubai-based businessman Umar Farooq Zahoor, a private TV channel reported on Tuesday Zahoor, the Norwegian-Pakistani millionaire, claimed in the TV programme that he has evidence to prove he bought the rare watch and three other Toshakhana gifts from Farhat Shahzadi, also known as Farah Gogi for 7.5 million Dirhams in cash. The businessman appeared on the TV programme to show evidence of the purchase as well as all the Toshakhana gifts he owns now. “I Umar Farooq, S/O late Zahoor Ahmed resident of R/o (Address as Per Cnic) House No D-102/1, Block-4, Clifton Karachi, currently Residing at Muhammad Bin Rashid City, District One, Dubai, United Arab Emirates (UAE) do hereby solemnly affirm and declare on oath that I was introduced to Ms Farhat Shahzadi by Mr Shehzad Akbar and bought the following ornaments, jewellery SET 2 by Graff from Ms Farhat Shahzadi having CNIC No 35201-2625741-8 and Passport No. BP5147413 for AED Seven Million and Five Hundred Thousand Dirhams (AED 7,500,000) paid as cash,” Zahoor said in an affidavit, which lists the four gifts he purchased from Farah Gogi. The gifts mentioned include Diamond MasterGraff Tourbillon Minute Repeater with Makkah Map Dial GM2751, Diamond Cufflinks with 2.12ct H IF and 2.11ct I IF Round Diamonds GR46899, Diamond Gent’s Ring 7.20cts, VVSl Rose Gold Pen Set with Pave Diamonds and Enamel Makkah Map.

Zahoor, who is an ambassador at large for the Republic of Liberia, says that it was in March 2019 when former accountability minister Shahzad Akbar introduced him to Gogi and told him he should meet her during a Dubai visit and look at the unwanted rare gifts she wanted to sell. He says when he met Gogi and saw the gifts, he was instantly interested because these items are rare and priceless. “Gogi was frank. She told me the history of these gifts and said these have been given to prime minister Imran Khan by the Saudi Crown prince and that she wanted to sell these on behalf of Imran Khan and his wife Bushra Begum. She told me that Akbar had asked her to meet me in Dubai. After verifying the authenticity of the items, I didn’t negotiate the price. I paid her whatever she asked for as these gifts are priceless. As soon as the payment was made, Gogi reported on the phone to Akbar that the deal was through and thanked him for introducing her to me. Akbar thanked me for buying the Toshakhana gifts and requested that I don’t speak about this matter to anyone. I agreed.”

Zahoor says things remained quiet until Akbar got in touch with him again and spoke on behalf of Sophia Mirza, Zahoor’s former wife, asking him to return their two daughters to Pakistan.Zahoor and Sophia have been involved in court battles over the custody of their twin daughters for the last 14 years or so. Akbar, says Umar Farooq, threatened him to send his daughters to Pakistan and settle the dispute with Sophia on her terms or face consequences.

Zahoor said, “I refused to be blackmailed and a campaign of terror was started against me by Akbar. He used the FIA to register fake cases of international financial crimes. Unfortunately, my biggest mistake was to buy this expensive watch as I was flagged as a wealthy person and an extortion campaign started against me using the entire government bodies, including the cabinet of the former prime minister, who gave blanket approval to Akbar to go after me. Interpol was misused trying to extradite me to Pakistan through a Red Notice. ”

According to Zahoor, Akbar lied to the cabinet of Imran Khan and took permission to register fake criminal cases against him in collusion with his ex-wife Sophia. “The FIA Corporate Crime Circle Lahore also initiated an inquiry against me over allegations of fraud and money laundering of around Rs16 billion on the complaint of my ex-wife who was blackmailing me. My name was placed on the Exit Control List; non-bailable warrants in one of the FIRs were obtained from the Court without fulfilling the legal requirements and based on said non-bailable warrants, my passport and CNIC were blacklisted and Red Warrants were issued through Interpol by National Crime Bureau Pakistan for arresting me. I am speaking out now to tell the truth to Pakistanis what kind of people these are who occupied high positions in Pakistan.”