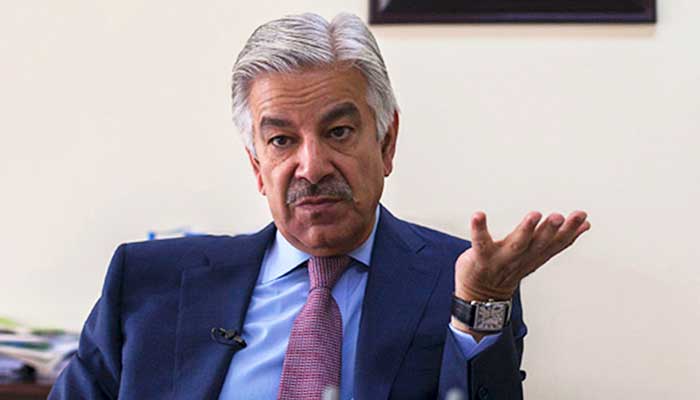 Imran Khan to pay political price for misleading nation on cypher issue: Khawaja AsifISLAMABAD: Defence Minister Khawaja Muhammad Asif has said that PTI Chairman Imran Khan will have to pay politically for a misleading narrative regarding the US cypher and dragging the country and parliament into disrepute and embarrassment.

Khan withdrew his narrative on the “US conspiracy” that allegedly led to his ouster as the prime minister in an interview with Financial Times.

“As far as I’m concerned, it’s over, it’s behind me. The Pakistan I want to lead must have good relationships with everyone, especially the United States,” Khan said while expressing a desire to mend ties with Washington.

The “u-turn” drew a strong reaction from the stakeholders of the incumbent government, which Khan alleges was involved in the “conspiracy” against him.

Asif, while speaking in the National Assembly commented on Khan’s withdrawal from his stance and said that the PTI chief cannot absolve himself by saying “it’s over and now it is behind me”.

The minister said Khan flashed a fake document in a public meeting, terming it a cypher, saying time and again that “Haqeeqi Azadi” had been snatched from the people of Pakistan.

He said the PTI chief termed the removal of his government a conspiracy and linked it with Washington to bring into power an “imported” government.

Asif went on to say that the nation should not let Khan get himself off the hook and (should) hold him accountable for misleading them in the name of “conspiracy” and repeating the mantra of “conspiracy” in every nook and cranny of the country.

The minister said the former premier played with the destiny and dignity of the country and nation by pointing fingers at the world’s super power with whom Pakistan had a 70-year relationship.

Repeating, he said: “Imran will pay a political price for what he said in the past but he should also be held accountable as per the Constitution.”

“Now is the time the nation and the Parliament seized Imran by the neck,” Asif thundered. “There is a long list of corrupt practices during his three and a half years of rule. The highest office of prime minister was involved in stealing precious gifted wristwatches from Toshakhana,” he said.

Asif said it’s a pity that after such a statement from Khan, a large number of people still believed him to be an honest person and a man of ideology and conviction. He said the PTI chief not only backed out of his stance but was also begging not only before the US but also inside Pakistan.

“Imran Khan wants both foreign and domestic backing to keep his political dreams going,” he said. He said Khan’s political life was full of contradictions and he could not keep his stance on any issue for more than a few weeks or months.

Asif said the National Assembly threw Khan’s government out and brought a new government into power through the use of vote but the PTI chief termed the whole exercise an “international conspiracy” and the government an “imported one”.

He regretted that without caring for traditions, Nawaz Sharif and his daughter, Maryam Nawaz, and Asif Ali Zardari and his sister were put behind the bars on fake charges during PML-N’s tenure.

“I myself faced charges under Article 6 which never happened to any politician,” he said.

Talking to the media outside the Parliament House, the defence minister made it clear that Prime Minister Shehbaz Sharif will appoint the next army chief as it is his constitutional discretion and mandate.

“The prime minister has the discretion to appoint the army chief; therefore, he will decide on the appointment,” he said while responding to a question.

Asked if a decision on the army chief’s appointment had been made, the defence minister responded in the negative.

Responding to another question about the role of Nawaz in the army chief’s appointment, Asif said it will be done at the “premier’s discretion” and he will decide.

Asked if Nawaz was not being consulted on the matter, the minister said: “Consultations have not yet taken place on the army chief’s appointment. These are just newspaper reports.”

“Imran denies everything. In the past four years, he has talked so much. Has he stood by any of his statements? If it is the first time he has denied something?”

“He himself does not remember the state he is in and what he says. Yesterday, he said the FIR of his murder has not been registered. This man does not know what he says. If some people are ready to believe his words, it is their matter,” Asif said commenting on Imran’s contradictory statements.

Meanwhile, PM Shehbaz Sharif Monday night said Khan’s rebuttal of his foreign conspiracy theory was a reminder of the vicious role he had played to harm Pakistan’s external relations while pursuing his own petty politics.

“Niazi’s interview with FT in which he rebutted his foreign conspiracy theory is a reminder of the vicious role he played to harm Pakistan’s external relations while pursuing his own petty politics,” he said on his Twitter handle.

He said Imran’s deceit and treachery had inflicted irreparable damage on Pakistan.

Reacting to Khan’s “U-turn” on the cypher issue, Federal Minister for Information Marriyum Aurangzeb said it will not end the matter and he will have to be held accountable.

“Mere withdrawal is not enough without answering in relation to the narrative on which chaos and lies were spread all over the country. There is no question of Imran today, but today there is a question mark for those who believed his words,” she said.

She insisted there was a question mark for those who listen to the foreign-funded fitna (Imran) playing with falsehood, and national interest. She said by calling the parliament, Pakistan Army, and other state institutions traitors, Khan could not absolve himself by just saying “it’s behind me and it’s over”.

The minister accused Khan of violating the constitution through his lies, saying he withdrew from the narrative of American conspiracy after destroying the country.

“Imran has treated his supporters as mad and sheep and goats. He put behind the narrative of an American conspiracy, imported government and regime change because it never existed.”

“Today, the real face of the so-called ‘real freedom has been completely exposed. Imran put Pakistan’s foreign relations in serious danger for the sake of power and also played a serious game with the country’s interests in lust for power,” she alleged.