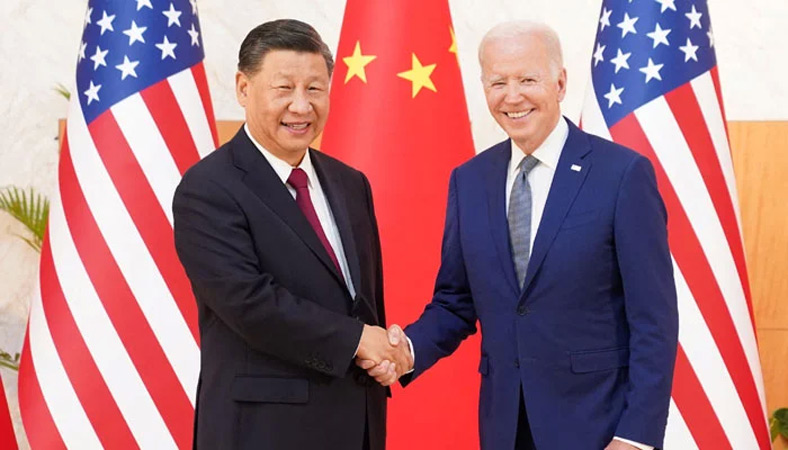 Chinese President Xi Jinping told his US counterpart Joe Biden Monday that the world was big enough for their two countries to prosper and compete, while warning Washington against crossing Beijing’s “red line” on Taiwan.

“Under the current circumstances, China and the United States share more, not less, common interests,” Xi told Biden during three hours of talks in Bali, Indonesia, Beijing’s foreign ministry said in a statement. Beijing does not seek to challenge the US or “change the existing international order”, Xi reportedly added, calling for the two sides to “respect each other”. But Xi warned Biden not to cross Beijing’s “red line” over Taiwan. “The Taiwan question is at the very core of China’s core interests, the bedrock of the political foundation of China-U.S. relations, and the first red line that must not be crossed in China-U.S. relations,” Xi told Biden, according to the foreign ministry, adding “resolving the Taiwan question is a matter for the Chinese”.

The two leaders were also reported to have discussed the situation in Ukraine, with Xi telling Biden Beijing was “deeply concerned” about the conflict. “China has all along stood on the side of peace and will continue to encourage peace talks,” the Chinese leader was reported to have said. “We support and look forward to a resumption of peace talks between Russia and Ukraine.”

The two, holding their first in-person talks since Biden became president, met on the Indonesian island of Bali ahead of a Group of 20 (G20) summit on Tuesday. They smiled as they shook hands warmly in front of a row of Chinese and US flags in a ballroom at the luxury hotel Mulia on Bali’s Nusa Dua bay. “It’s just great to see you,” Biden told Xi as he put an arm around him, adding in remarks delivered in front of reporters that he was committed to keeping lines of communication open on a personal and government level. “As the leaders of our two nations, we share responsibility, in my view, to show that China and the United States can manage our differences, prevent competition from … turning into conflict, and to find ways to work together on urgent global issues that require our mutual cooperation.”

Neither leader wore a mask to ward off COVID though members of their delegations did. Biden and Xi, who have held five phone or video calls since Biden became president in January 2021, last met in person during the Obama administration when Biden was vice president. Monday’s meeting was unlikely to produce a joint statement, the White House has said. G20 summit host President Joko Widodo of Indonesia said he hoped the gathering on Tuesday could “deliver concrete partnerships that can help the world in its economic recovery”. However, one of the main topics at the G20 will be Russia’s war in Ukraine and Biden will be “unapologetic” in his defence of the European nation, U.S. officials said last week.