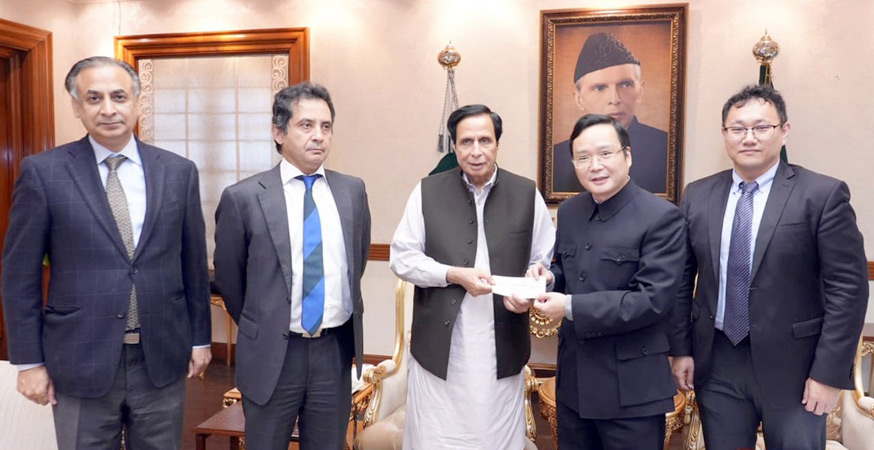 It was agreed in principle to promote cooperation regarding the installation of air purification towers to control smog, says a handout.

The chief minister noted that smog has become a global problem and the government wants to use Chinese technology to control it in Punjab, especially in Lahore. Chinese technology will be beneficial for installing air purification towers in Lahore and other cities. Air-purified towers will be installed near border areas and industrial areas, he added.

These towers will also be used for early flood warnings and other purposes. The Punjab government has also imposed an environmental emergency to control smog, he added. The Chinese consul general announced a scholarship of six million rupees for the students of Punjab this year and presented a Rs30 million cheque for flood relief. Pervaiz Elahi thanked the Chinese government and the consul general and said that the Punjab government is thankful for the financial support of the flood victims. The federal government has not given a penny to the Punjab government for the rehabilitation and resettlement of the flood victims; he mentioned and added that the provincial government is resettling the flood victims with its resources. The provincial government would extend every possible cooperation for a new Chinese consulate, he stated. The consul general thanked CM Pervaiz Elahi for the assurance of support regarding the new consulate and said that the Chinese scholarship for Punjab students would be further enhanced from next year. Punjab has a very favorable environment for investment and Chinese companies want to invest in Punjab. All possible measures will continue to increase cooperation in various fields, he added. The consul general also invited CM Pervaiz Elahi to visit the consulate and embassy. The Chief of the Political Section of the Chinese Consul General Mr Yan Yang was also present. Chief Secretary Abdullah Khan Sumbal, Senior Member Board of Revenue Zahid Akhtar Zaman, Former principal secretary GM Sikandar, former president Bank of Punjab Hamesh Khan, secretary environment, Zeeshan Zakaria and others were also present.

Meanwhile, Pervaiz Elahi ordered to reduce the protocol and security for himself and directed not to stop traffic during his movement.

“Signal-to-signal traffic flow should be maintained and the stoppage of traffic at the place should not be more than one per cent,” he said.

The CM asserted that stopping the traffic should be avoided keeping in mind the convenience of the people. Stopping the traffic disturbs people and I want to relieve the inconvenience, we have come for the convenience of the people, he maintained. The chief minister further said that foreign teams and players will be given security according to the Blue Book and traffic police will be equipped with body cams. A security-related meeting was held under the chair of CM Pervaiz Elahi which was attended by Provincial Minister Mian Mehmood-ul-Rashid, Principal Secretary Muhammad Khan Bhatti, GM Sikandar, CCPO, DIG Security, Chief Traffic Officer Lahore, Chief Security officer and others.

Meanwhile, Pervaiz Elahi said diabetes is increasing due to an unhealthy lifestyle.

In his message, the CM noted that a timely diagnosis of diabetes is important as the patient could succumb to other diseases in case of any slackness. A simple lifestyle helps avoid diabetes, and prevention is better than cure, so patients need to take preventive measures along with treatment, he said. The CM termed it important to change the lifestyle to prevent and control diabetes and added that awareness campaigns for timely diagnosis and treatment of diabetes will bring positive results. People could remain safe from diabetes with a balanced diet, daily exercise and walks. Meanwhile, the government has set up diabetes centers in major hospitals to provide the best treatment facilities to the patients, he concluded.