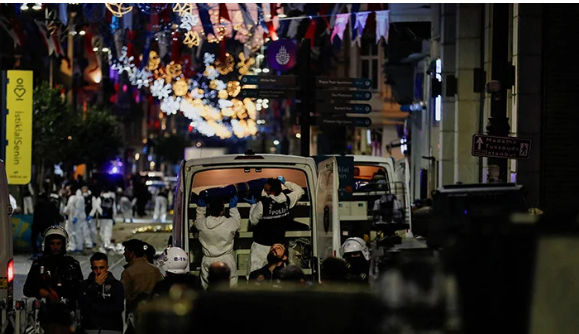 In a statement, Foreign Office Spokesperson said Pakistan firmly stands with the brotherly people of Turkiye in the fight against the scourge of terrorism.

The spokesperson stated that we are confident that any attempts to destabilise the peace and stability of Turkey will be thwarted by the strong Turkish people.

They expressed condolences on behalf of the government and people of Pakistan to the amiable Turkiye people in their respective statements. Additionally, they prayed for the injured by the blast to recover quickly.

Turkey interior minister accused the Kurdistan’s Workers’ Party (PKK) of responsibility for a bombing in a busy Istanbul shopping thoroughfare that killed six people and said Monday a suspect has been arrested.

The explosion tore through Istiklal Street, a popular shopping destination for locals and tourists, on Sunday afternoon, wounding dozens.

A suspect was arrested by the early hours of Monday.

“The person who planted the bomb has been arrested,” interior minister Suleyman Soylu said in a statement broadcast by the official Anadolu news agency.

“According to our findings, the PKK terrorist organisation is responsible,” he said.

The PKK, blacklisted as a terrorist group by Ankara as well as its Western allies, has kept up a deadly insurgency for Kurdish self-rule in southeastern Turkey since the 1980s.

Regularly targeted by Turkish military operations, the group is also at the heart of a tussle between Sweden and Turkey, which has been blocking Stockholm’s entry into NATO since May, accusing it of leniency towards the PKK.

“It might be wrong if we say for sure that this is terror but according to first signs … there is a smell of terror there,” Erdogan told a news conference on Sunday.