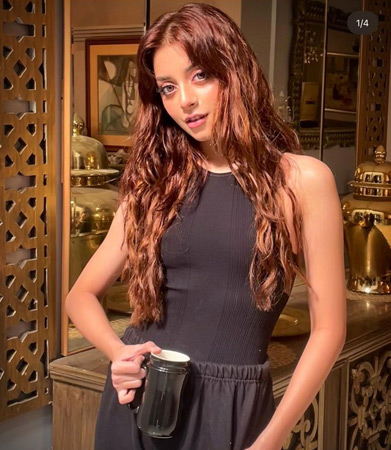 The ‘Dil Mom Ka Diya’ actor turned to her account on the photo and video sharing application, Saturday, and posted a new picture gallery of herself on the feed. The celebrity added a single skull and cross-bone emoji in the caption of the four-picture gallery.

The clicks see Alizeh Shah in a pair of black trousers with a matching knitted tank top. She held a coffee mug in her hand while posing at what looks like the set of her on-air drama ‘Taqdeer’. The actor wore her long hair in curls with doll face makeup.

The viral snaps received love from the massive social media fanbase of Shah in the form of thousands of likes and numerous compliments in the comments section.

Apart from being a social media darling with 4.1 million Instagram followers, Shah also enjoys a huge fanbase in the offline world, thanks to her impressive performances in a number of superhit serials including ‘Dil Mom Ka Diya’, ‘Mera Dil Mera Dushman’ and the telefilm ‘Chand Raat Aur Chandni’.