* Almost 30 years after ‘Pulp Fiction,’ these kings of cool team up for a Hawaii-set action feature that isn't as much fun as it sounds 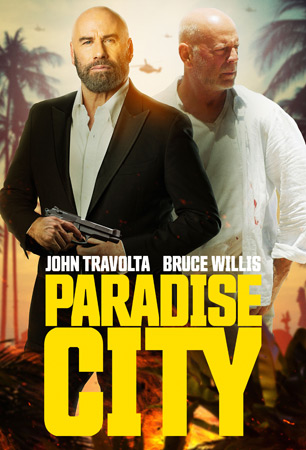 From the outset, Paradise City sounds painfully generic. While it may be generic, it’s far from painful, as the writing trio behind the movie set up their web of connections decently enough, even though their alleged surprises fail at doing that, but the final product gets the job done.

Bounty hunter Ian Swann (Willis) had recently got himself into a standoff while collecting a mark, which resulted in him being gunned down on one of the many beaches of Maui. While also hunting for checks, Robbie (Dorff) is met by Ian’s son, Ryan (Jenner), who he tells about a big contract his father was tracking, named Billford, who may’ve been the reason Ian was killed. Paradise City has to work through a bit more exposition than one would expect, and the script throws a lot of names around which can be hard to track, but the movie does manage to clean itself up as it goes along.

Their investigation brings them to politician Kane’s (Richmond) party that’s being hosted by Buck (Travolta), where they find out that Billford is dead at the cost of Robbie’s capture. Suspecting that Buck had something to do with both of these things, Ryan teams with cop Savannah (Lundberg), and eventually his father (who most will guess isn’t dead) to bring down Buck by infiltrating his forces before he can execute his surely malevolent plans in Maui’s “Paradise City”. It’s a lot of information to swallow with definitions surrounding each event kept to the minimum. Russell, Drake, and Large smooth things out in due time, but it’s regrettable that it had to be ironed out in the first place.

The Characters: Again, the movie doesn’t do much to assuage the audience beyond the basics, offering acceptable renditions of archetypes with a few minor displays of real character in a select few moments.

Both Swanns are merely average reruns of families in action/crime movies. Ryan is out of his depth amongst the seedier characters of Paradise City, as he’s a bounty hunter like his father, but only uses non-lethal force. Other than that, he’s a bit of a disappointing blank, as he goes through the detective motions with occasional sparks of wit when presented with opposition. During the few scenes Ian is in before the last 20 minutes, he’s shown as a typically wisecracking antihero who doesn’t back down in a fight, except to call his son and tell him he loves him.

Savannah and Robbie are fine enough, with the former being the generic good cop within a swathe of corrupt ones, opting to help maintain some form of law and order on the island, even if she goes behind the law from time to time. She’s got a few moments of ingenuity but is another “blah” rendering of a traditional role. Robbie is the requisite ex-partner to Ian, who eventually fell out of contact to do his own thing, spending more time racking up a bar tab than doing work, though he’s still capable of doing his job.

Buck is an above-average bad guy; he’s in love with his power over the island and wants more of it. His goal is to dig further into the financial potential of Maui by introducing more “trade ports” that are really just ways to funnel drugs into the islands and get richer. He’s theatrical and loves it, monologuing to Ian and others to show off said influence, and even goes farther by dropping an opposer into a volcano. Now that’s the showmanship Paradise City could’ve used more of.

Those expecting Paradise City to be an out-and-out action movie will be disappointed, as Russell focuses more on the schemes and procedural mechanics that drive the plot forward, which continues the streak of the movie’s elements being merely average.

Part of Paradise City hinges on the supposed death of Ian, which is played out in the form of a pretty decent action setpiece. While he was hauling a captive away for cash, he was ran off the road and forced to make a last stand against armed men; obviously, he takes a round and is presumed dead, which invites Ryan and Savannah to follow up. Their investigation is thoroughly average, as they go to the crime scene, find Ian’s phone, on which he recorded the gunfight, and use it to track his killers. It’s all rather unremarkable, except for a detour to visit some locals which doesn’t add much to the feature.

On the other end is Buck, whose dealings aren’t much livelier. He’s backing potential senator Kane to get a slice of the new infrastructure that would be built under his tenure, allowing him to monopolize the real estate of Maui, as well as introduce narcotics into the communities. It’s a sinister plan, but nothing original. While it may seem like Buck’s infatuation with himself could be a detriment, Paradise City makes sure to deny this by capturing Robbie and using him as a pawn in his scheme, which isn’t special, but it’s different enough.

Russell does make the push to turn Paradise City’s last act into one about action, but the leadup to it is all perfunctory crime movie sequencing, arranging the main parties and adding in some support on both ends, all to middling results.