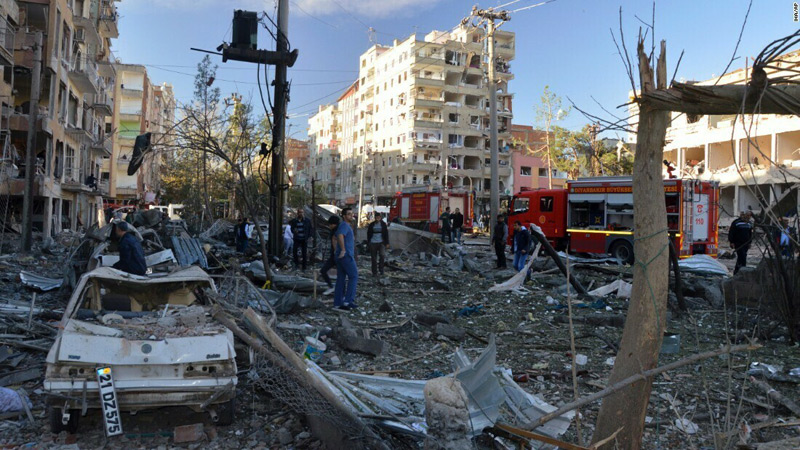 An explosion on Istanbul’s Istiklal Avenue Sunday left at least six people dead and 53 others injured, Turkish President Recep Tayyip Erdogan said. Addressing a press conference before leaving for Indonesia to attend the 17th G20 summit, he said that based on initial information from the city’s governor, the explosion could be suspected act of terrorism. Initial observations also show that a woman played a role in the blast, he said, adding that all perpetrators will be identified. “Efforts to seize control of Türkiye and the Turkish nation through terrorism will not yield results,” the president added. Earlier, Istanbul Governor Ali Yerlikaya said the blast occurred at around 4.20 pm local time, with police and emergency officials sent to the scene. The cause of the explosion was not immediately clear. Ambulances rushed to the scene on the packed Istiklal Avenue, which police quickly cordoned off.

The area, in the Beyoglu district of Turkiye’s largest city, had been crowded as usual at the weekend with shoppers, tourists and families. “When I heard the explosion, I was petrified, people froze, looking at each other. Then people started running away. What else can you do,” said Mehmet Akus, 45, a worker in a restaurant on Istiklal. “My relatives called me, they know I work on Istiklal. I reassured them,” he said. Local media said crime inspectors were on the scene and Anadolu reported that the Istanbul chief public prosecutor’s office had launched an investigation into the blast.

While the cause of the blast was unknown, Istanbul and other Turkish cities have been targeted in the past by Kurdish separatists, Islamist militants and other groups. The Turkish Red Crescent said blood was being transferred to nearby hospitals. Turkiye’s RTUK regulator imposed a broadcast ban on coverage of the blast around an hour after it occurred. “My condolences to those who lost their lives in the explosion on Istiklal Avenue,” Mayor Ekrem Imamoglu said on Twitter. Images shared on social media at the time of the explosion indicated it could be heard from far away and that there were also flames.