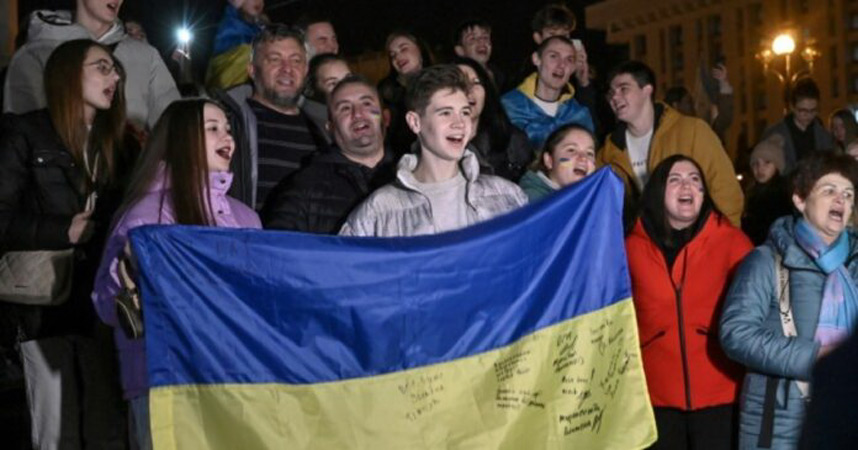 Kyiv said on Saturday that the West was on its way to “joint victory” over Moscow after Ukraine said it had wrested back Kherson, the first major urban hub to fall after Russia’s invasion on February 24.

London meanwhile said Russia’s “strategic failure” in the strategic Black Sea port city would sow doubt among the Russian public about the point of the war in Ukraine. “There were very few who believed that Ukraine would survive,” Ukrainian Foreign Minister Dmytro Kuleba said as he met US Secretary of State Antony Blinken on the sidelines of a Southeast Asian summit in Cambodia.

“This is coming, and our victory will be our joint victory — a victory of all peace-loving nations across the world.” Blinken hailed the “remarkable courage” of Ukraine’s military and people and vowed that US support “will continue for as long as it takes” to defeat Russia. The humiliating Russian retreat was a huge boost to Ukrainians after months of suffering. The secretary of Ukraine’s National Security and Defence Council, Oleksiy Danilov, said the liberation of all annexed territories was just a matter of time. “We are not going to put anything on ice,” he said. “We are not a freezer.”

The Ukrainian national anthem rang out in Kherson’s central square as a small crowd sang along while huddled around a bonfire, a video published by Ukraine’s parliament on social media showed. “Special units are already in the city,” President Volodymyr Zelensky wrote on Telegram, posting footage in which Ukrainian troops appeared to gather with residents. About 50 kilometres (30 miles) from Kherson, Andriy Zholob, a commander of a medical unit, said they had been greeted by smiling faces and given “embroidered towels which we display on our vehicles”. “We see children running to meet us and greeting us,” Zholob told AFP.

In the nearby region of Mykolaiv, which Russian forces have failed to capture despite months of attacks, governor Vitaliy Kim said the entire region apart from the Kinburn Spit in the south had been returned to Ukrainian control. The US hailed Ukraine’s “extraordinary victory” in recapturing Kherson from the Russians on Saturday.

“It’s a big moment and it’s due to the incredible tenacity and skill of the Ukrainians, backed by the relentless and united support of the United States and our allies,” US National Security Advisor Jake Sullivan said. British Defence Secretary Ben Wallace said Saturday that Kherson could prompt ordinary Russians to question the war.

“In February, Russia failed to take any of its major objectives except Kherson,” Wallace said in a statement. “Now with that also being surrendered, ordinary people of Russia must surely ask themselves: ‘What was it all for?'” Kuleba however warned that Kyiv still sees “Russia mobilising more conscripts and bringing more weapons to Ukraine” and called for the Western world’s continued support. In Kherson, Kyiv’s forces reconnected the local television network to Ukrainian broadcasters after local media reported that retreating Russian forces blew up the television tower and energy facilities, leaving the city without power.

Russia’s defence ministry said “more than 30,000 Russian servicemen, about 5,000 pieces of hardware and military equipment and materiel have been withdrawn”. Kherson’s full recapture by Kyiv would be a political and symbolic blow to Putin and open a gateway for Ukraine’s forces to the entire Kherson region, with access to both the Black Sea in the west and Sea of Azov in the east. In Ukraine’s capital, the news was met with joy. Wrapped in flags, popping champagne corks and belting out the Ukrainian national anthem, residents of Kherson living in Kyiv gathered in the city’s central Maidan square to celebrate.